As I passed the one-year anniversary of stepping into the role of executive director of The Land Connection, I stopped for a moment, while eating a bowl of perfectly ripe juicy tomatoes from my garden, to think about what we had been up to for the past 12 months. While I knew that we had been really busy, I realized that I had not taken the time to savor–or even list–our very quantifiable accomplishments. 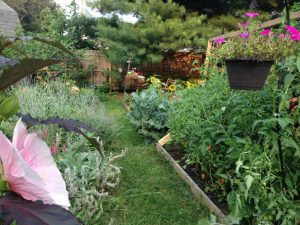 So as I sat  in my own personal mini urban farm, surrounded by still thriving lettuce (how about this cool weather?), abundant chard, ripening tomatoes, newly laying hens, and some downright overly opportunistic volunteers (squash and sunflowers)…and maybe a few garden fairies?, I put pen to paper and took a trip down farmer training and farmland access lane…

This time last summer we were in the middle of our extremely popular Farm Fresh Now! series, and were holding  Farm Dreams workshops–which introduce people who had either never farmed before, but were thinking about it, or who had farmed before, but were considering changing the kind of farming they were doing, to some of the realities of diverse, sustainable farming. The groups were enthusiastic and willingly drew pictures of their future farms, and shared their visions with with the rest of the class and the experienced farmers who sat on a panel to answer questions. From those workshops, a few became clear that farming was something they wanted to pursue, and so they decided to take our (biggest ever) full-year farmer training course, Central Illinois Farm Beginnings, which began in the fall, and was for the first time, held on a working farm, Prairie Fruits Farm and Creamery in Champaign.

The change in venue for the class made sense for a few reasons, the first being obvious–that it made sense to hold a farmer training course on a farm! and the second being that The Land Connection had moved its offices to its new home in downtown Champaign. As we settled into our new home, things got busy fast. Although the year was winding down, we were ramping up for a winter packed with farmer training classes, farmland access programs, launching our new website, and of course conference season. And to keep up with all of the work, we needed more staff. So we hired Magdalena Casper-Shipp as our office manager in the fall, and Jeff Hake as our farmer training program manager in late winter.

As Magdalena organized the office and stepped up our outreach efforts, and Jeff took over the Central Illinois Farm Beginnings class, Terra ramped up our farmland access program. She held our second series of plays, Look Who’s Knockin’, at several locations around Central Illinois, added a new series of farmland access roundtables, and drove around the state doing individual consultations with families going through farmland transitions and connecting new farmers with landowners.

As spring approached, even if the weather didn’t seem so spring-like, we were in the mood for a party, and so we brought back Ramp Fest, a fundraiser celebrating of the first green of spring (ramps are a beautiful wild onions that pop up in early spring). At the same time the Central Illinois Farm Beginnings students were finishing up their business plans, and were making connections with their mentors (who they are working with this summer), and Shea Belahi, our first incubator farmer, was getting started growing vegetables on her plot at Prairie Fruits Farm and Creamery.  And we were busy planning a new series of advanced farmer training workshops, the first of which was on the topic of agritourism, and was appropriately  held in June at Prairie Fruits Farm and Creamery.

When we found ourselves in the season of Farm Dreams workshops again and continued to add workshops, events, and projects to our schedule, we had once again outgrown our capacity, and by this summer we needed more staff again, so in July we hired Stephanie Fenty as our administrative and program assistant. Stephanie has not even been here for a month, but since she had been our summer intern last year, she was able to step right into her job and make all of our lives easier right off the bat!

Looking forward to the next few months, we are busily planning a series of legal issues workshops (aimed at people who train or work with farmers), accepting applications for the 2014-15 Central Illinois Farm Beginnings class, planning an advanced farmer training workshop focused on alternative grains, and getting out into the community–come and find us at a farmers’ market near you!

It has been a fantastic year for The Land Connection, and I am excited to start my second year as executive director with an incredible staff of five, which will allow us to to train even more farmers in resilient, restorative farming techniques; spend more time engaging the community, and teaching people about the sources of our food and why that matters; and continuing to to protect and enhance farmland so that we, and generations to come, will have clean air and water, fertile soil, and healthy, delicious food.