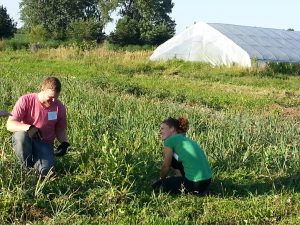 It was July of last year and I had just moved to Champaign. In fact, it was one of the first times I had even stepped foot on a farm. It was a beautiful, sunny, clear blue day. There was a slight breeze, and Tomahnous Farm was vast, green and gorgeous.

I parked on the side of the road and walked up to the house, where 20 eager, but just as nervous as I was, registrants stood waiting, introducing themselves, looking around the farm. After everyone had arrived, Lisa took charge and lead us out into the rows, showing us where the onions were growing, the green houses, where the blueberries should have been (but it had been a wet year), told us stories about evil trespassing rabbits and deer and explained which plants were to be pulled and which to leave in the ground.

Then just like that they were off. People who had never met, of different ages and backgrounds on their knees, digging in the dirt, laughing and talking. Every few minutes we called out for a switch in location–many were reluctant to end their conversations so abruptly. It was amazing to watch how quickly people got to know each other in this strange environment.

After an hour, we returned back to the house, cracked a bottle of wine, and snacked on fresh tomatoes, local bread, goat cheese. It was as if everyone had known each other all along. The farm cats and dog even came out to hang around.

Weed dating. Sounds strange, ridiculous even, who would want to come out and pull weeds for fun? But it’s one of those activities that brings people together, whether it’s something they’ve never done, or are an old pro at. People teach and learn from each other and spend time getting to know each other outside of the same old, same old. They find others with the same passions, interest, and idea of a good time. And we get to bring people back to the land, let them feel that glorious feeling of working with their hands in the earth, let them see what goes into growing the food that they eat. And just have a lovely evening on a lovely farm. I’m looking forward to going again this year. What about you?

Register for this year’s Weed Dating on Thursday August 20. $10 registration includes light refreshments and an evening of meeting great people on a great farm.