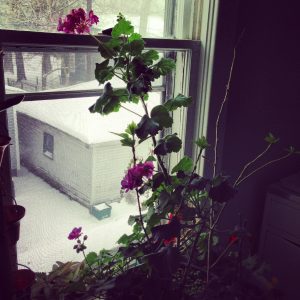 I have a not very smart geranium.  I’ve had it since 2008. Every summer, it sits on my porch and blooms a few times and then does nothing but sit there looking green. By the time the first night below freezing rolls around, I drag it inside and it takes up valuable kitchen real estate for the next five months. Usually, just in time for the first major snowstorm, it’s gotten used to being inside and has gone crazy. Right now, it’s snowing heavily outside and the geranium has three stalks heavy with blossoms. The contrast between the subzero windchills and the summery geranium flowers never fails.

Geraniums are mostly just decorative plants in the United States, though they have their uses in homeopathy as essential oils to help cure skin, respiratory and intestinal ailments, as well as being helpful for warding off mosquitoes.  The plant family is found in temperate zones around the world, though what we colloquially call “geraniums” are actually part of the genus Pelargonium, which is in the same family as true Geranium, Geraniaceae. The kind of geranium we grow in flowerpots is indigenous to southern Africa.

At the same time I’m reading about the sub-Saharan ancestors of the geranium in my kitchen, I am watching my garden get covered in a foot of snow and feeling like it might never be warm again. Seeing that geranium’s renewed interest in life in January makes it possible to daydream about starting seeds for transplanting to the garden. That foot of snow on the ground will soak into the ground and, if we are lucky and have enough deep snow, will insulate the spinach that was planted in the fall from the bitter cold, and then help saturate the ground and nourish seeds and new life come spring.

This summer, I have plans to farm on an acre, making the dreams of summertime even more important.  But before I start any of that, I’m looking forward to going on vacation and seeing flowers and greenery in places other than my kitchen, and not seeing snow covered roofs when I look out the window.