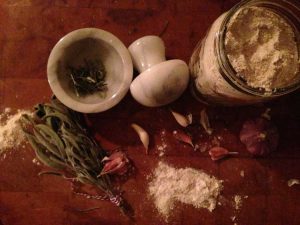 This past Saturday afternoon was chilly, and although the last of the garden beds waited to be mulched, the garlic that needed to be planted sat on my counter, and the chicken’s water was still at risk of freezing, I decided to wait for a warmer window to do my chores. The blustery day called for the smell of herbs and the warming of the kitchen by cooking all day.My inspiration was plentiful, as a luxury had landed in my hands that morning via a home delivery of vegetables from Heirloominous farm. I also had Illinois grown ginger from River to River Farm–meaning there would be free flowing ginger tea all day as I cooked. 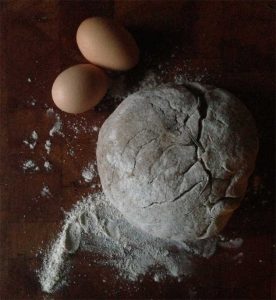 But I also wanted to bake bread. I had joined The Land Connection’s training on growing Organic and Specialty Grains last week, and I was so inspired by our Illinois organic grain farmers , that I was determined to bring grains into the fold of my increasingly local diet. We heard from large scale farmers (1000+acres) like Jack Erisman, Gary McDonald, and Harold Wilken, and from smaller, and even more diversified farmers like Andy Hazzard, Molly Breslin, and Will Travis.

All I had to do, it seemed, was to want it to happen. By mid-day, as black beans with garlic, onion, cumin, and cayenne pepper simmered on the stove next to the pot of ginger tea, I had a knock at my door.  A neighbor was standing there with two bags of multi-grain flour that he had purchased in Arthur while on a tour of Amish wood-working shops. And while I did not know the exact farm, I at least knew it was from central Illinois.

I had recently learned about baking bread in a dutch oven, and so I thought I would  give it a whirl. The recipe is quite simple, just flour, water, salt, and yeast. But I also had strands of herbs from the garden that were hanging from a rack to dry. so I crushed some, mostly rosemary, and added them to the mix. I would have to let the dough sit over night, but the wait was worth it.

Sunday morning I woke up early and went downstairs to preheat the oven with the cast iron pot in it. When the pot was hot 30 minutes later, I set the ball of dough in it with the lid on and returned it to the oven. The result was a beautiful, brown, crusty on the outside, moist on the inside, loaf of herbed bread. Add some butter and drizzle of honey for a perfect Sunday morning breakfast…and then there was sunshine, and the garlic got planted, the beds mulched, and the chicken’s water was winterized. 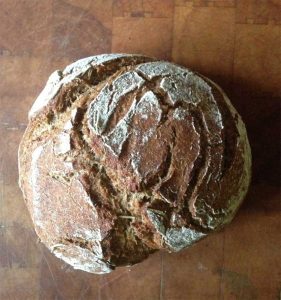