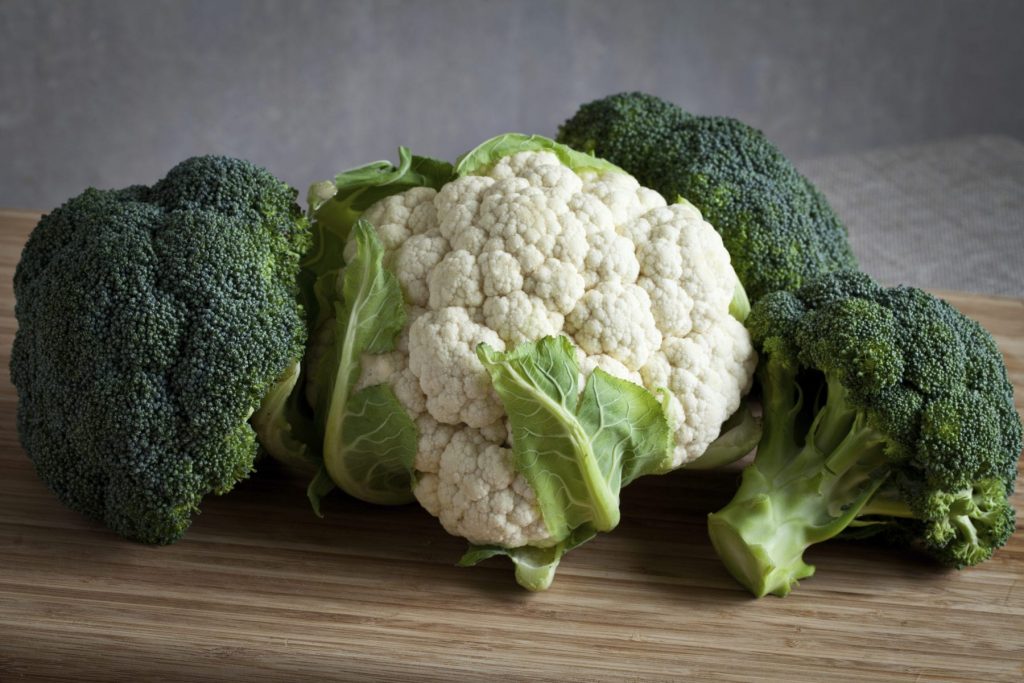 Broccoli and cauliflower are staples of the American diet. Unfortunately, they tend to find their way onto our plates via freezer bags. This is not to say that there is anything wrong with getting your vegetables from the freezer section of a store, but fresh broccoli, cauliflower, or romanesco from a local farm is simply delicious. The freshness truly comes through in the flavor and the texture of these crops. Unfortunately, once frozen the texture of the stem and florets is never the same and the flavor always seems to be lacking. But, that being said, they are still incredibly nutritious after being frozen, so if that’s how you want to buy and eat your vegetables, go right ahead. At least they’re vegetables.

Now, if you are interested in preparing any of these three crops fresh, then you’ve come to the right place. Personally, I love using broccoli, cauliflower, and romanesco interchangeably in dishes. Whether that’s a frittata or stir fry with peanut sauce. But, they do have some key differences and flavors that make one the better choice for a certain dish over the others. So, let’s get a little bit of a better understanding of broccoli, cauliflower, and romanesco and see where our culinary adventures take us.

Cauliflower comes in white, green, orange, and purple varieties. There is also a variety of purple broccoli that is often sold as purple cauliflower, but they are not the same. Orange, or yellow, cauliflower was discovered in Canada in 1970 and contains a genetic mutation that allows it to store more beta-carotene that it’s white relative. Orange Cauliflower also contains higher levels of vitamin A. Cauliflower is often used as a rice replacement as it is generally healthier due to higher nutrient density. Cauliflower is extremely hard to grow and special attention needs to be paid to the temperature, amount of sunlight, and soil conditions, among other things.

Romanesco, which is also a type of cauliflower, has a striking appearance because it forms the natural approximation of a fractal. Broccoli, Romanesco, and Cauliflower are all part of the cabbage family and require similar growing conditions to do well.

When shopping for cauliflower, broccoli, or romanesco you can follow similar guidelines. Look for heads that feel firm with tightly packed florets that are not browning. Also, try to avoid broccoli that is yellowed as that means it is overly mature. You can also find broccoli shoots which are the “second cuttings” of broccoli that grow after the main head has been harvested. They are just as delicious as the larger heads but with longer, more tender stems and smaller heads.

Broccoli is best used within a few days, though if stored properly it can up to a week. Store broccoli, unwashed, in a plastic bag in the crisper drawer of your refrigerator. For long-term storage, broccoli can easily be blanched and frozen. Cut into florets and slice the stems, place in a pot of boiling water for 3-4 minutes, and then dump into an ice bath or rinse in cold water to stop the cooking process. Drain the broccoli, let it dry, and then place it in an airtight container or freezer bag. You can also spread the blanched broccoli out on a baking sheet and put it in the freezer before bagging it so that the pieces freeze separately. Once frozen, bag the pieces and then the likelihood of them freezing in one big clump is significantly decreased.

When preparing broccoli, romanesco, or cauliflower similar steps can be taken. Dunk the entire head repeatedly into a sink or bowl filled with cold, salted water to remove any hidden pests. Some people say not to let the head sit in the water as you can lose some water-soluble nutrients in the process, though some recipes require this soaking method. Remove and blemished areas using a small knife. Remove the leaves from the cauliflower or romanesco — they are edible but typical not eaten. Snap or cut the florets off of the large center stalk and then cut the larger florets into halves or quarters so they are similar in size. The stalk of broccoli is often used as well, but typically requires peeling off of the fibrous outer layer.

Raw: cut into florets and serve broccoli, cauliflower, or romanesco with hummus or other dips, toss with pasta, sprinkle on pizza, or add to egg dishes, stir-fries, or salads.

Steaming: place florets in the steamer basket of a saucepan or pot with about an inch of boiling water in the bottom. Cover the pot and cook on your stove over high heat for 5-10 minutes. If you’re steaming an entire head of cauliflower maker sure the stem is towards the bottom of the pot and steam for up to 15 minutes, or until barely tender. All three can be easily overcooked and tend to release a strong odor when they are, so be careful not to overcook any of them. You don’t want mushy florets.

Roasting: cut into florets and toss with olive oil, salt, and pepper. Spread the florets out on a rimmed baking sheet and roast at 450°F for 15-20 minutes until lightly browned and tender.

Mashing (Cauliflower): cut into florets and place in simmering stock for about 10 minutes. Add heavy cream or milk and butter and mash with a potato masher or puree in a food processor.

Pureeing: after cooking cauliflower, place it in a blender or food processor and blend up with stock or butter and cream. Use the puree for a creamy soup base or use cauliflower puree as a soup thickener. The puree can be frozen for later use.

Pasta with Roasted Romanesco and Capers

Romanesco Salad with Bacon and Hazelnuts