Cathe Capel, owner of Seven Sisters Farm in Sidney Illinois, is a 2009 Central Illinois Farm Beginnings (CIFB) graduate. But that was only the beginning of her relationship with The Land Connection. She has also been a mentor, a board member, CIFB facilitator (for the third time), and general wearer of whatever hat needed to be worn.

As Cathe wraps up the business planning portion of this year’s class, and hands the reins over to The Land Connection’s new farmer training program manager, Jeff Hake, I started to think about all that Cathe has done for us, and how grateful we have been for her support. But as I was thinking, my mind settled on a day last summer when I was visiting the farm and talking to Cathe about what had led her to that point in her life. 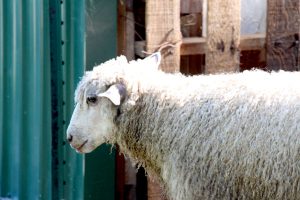 Raised right here in Champaign County, she has farming in her background, but for a long time her focus was on horses. She not only rode horses, but she also owned a boarding stable in Mahomet for a time. At some point along the way, she realized that she wanted to be on a farm full time, so after a year of searching, she found home, a 20 acre farm in Sidney, Illinois. She originally thought that she would have her horse on the farm, but it soon became clear that even though she liked it out there, her horse did not like the farm life.Now Cathe’s passion is her sheep, “nothing makes me happier than just watching my sheep out there, they are so peaceful.” She raises Leicester Longwool, a breed of sheep that is listed as critically rare by the American Livestock Breeds Conservancy. She raises them primarily because she loves their long wool (she is secretary of the Illinois Lamb and Wool Producers), but also sells them for lamb meat and breading stock. 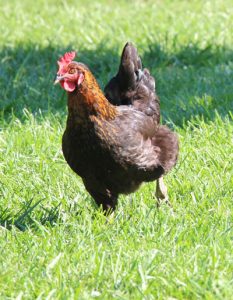 Cathe also raises chickens, both broilers and layers, and turkeys. At the time I was visiting she was raising Buckeyes, a critically endangered breed that is known for being decent layers and good meat birds. One of the reasons she was raising them was for a farm to table dinner for Slow Food with an Ark of Taste theme (read more about Slow Food and the Ark of Taste here) that was held at Prairie Fruits Farm—the meat was flavorful, but proved to be challenging for the chef to work with! You can find Cathe’s products at the Urbana Butcher Shop, the Natural Gourmet, and she does some on farm sales—although demand for her products outpaces supply. 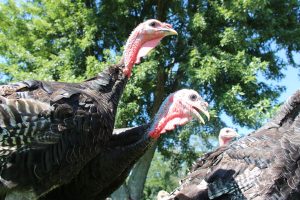 When I talked to Cathe about what she would say her greatest satisfaction is as a farmer, she did not hesitate, “I love lambing! I love the babies!” As for challenges, she said that the most difficult part is doing it (mostly) by herself. Her husband will help her, but the farm is her project, and since he works off of the farm, it is really up to her to keep it going. But, she says, “I wouldn’t trade it. It took me a long time, but I got here. I have wanted to be a farmer from the time I was in 8th grade.”

Cathe Capel is a featured farmer in The Land Connection’s 2014 Calendar.