An interview by Cara Cummings 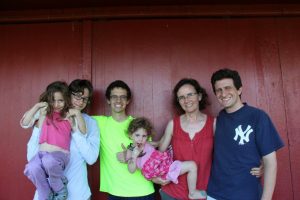 Katie Kenney used to spend her days in air conditioned classrooms lecturing on topics like statistics. Now, on any given 95 degree day with 80% humidity, you will find her planting trees, building fences, or taking care of livestock. She wouldn’t have it any other way.A graduate of the 2012 Central Illinois Farm Beginnings (CIFB) class, Katie is now in her second year of farming on her family’s four acre diversified farm in Mahomet, Illinois. Although she grew up in a farm house in Connecticut, and her mother was an avid gardener, Katie had no formal farming experience before taking CIFB. But she and her husband decided to move their family out to the country, leaving Katie’s university job behind so she could become a full time farmer. 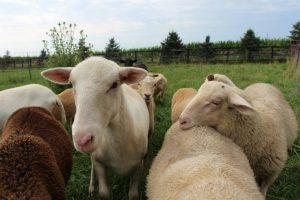 In her first year–the year she was in class along with her husband, Michael (who has an off-farm job), working on her business plan–she was also thinking about permaculture, and began planting fruit trees. By the spring of that year she was ready to go, and planted rhubarb and asparagus, and got her first sheep and first batch of broilers. Katie considered her first year to be a learning year, and so she took full advantage of the mentorship opportunity offered by CIFB, and was happy to be paired with Lisa Haynes of Tomahnous Farm, an organic farm with fruits, vegetables, flowers, and livestock. Lisa had Katie out to her farm to help and learn, and also came to Katie’s farm and helped her with livestock and even accompanied her to her first trip to the slaughter house. Katie also goes to the Central Illinois Sustainable Farming Network (CISFN) field days (which are free to CIFB students), and has enjoyed the opportunity to network with other sustainable farmers.When I visited the farm I was amazed at how much was happening on four acres–there were pigs, dairy goats, sheep, laying chickens, broilers, rhubarb, asparagus, a kitchen garden, and a lot of fruit trees and berry bushes, not to mention their four children! While I toured the farm with Katie and Michael, one of their sons (20) played drums in the garage and their other son (17) helped the little girls (3 and 6) make pink cupcakes in the kitchen.

I asked Katie how she chose what to raise on her farm , and she explained that she wanted a diverse farm that included livestock, and that she was also limited to four acres—and doesn’t get along well with mechanized equipment, “I am basically one woman with a rake, a shovel, and a hoe.” So, she did what she was capable of. She keeps the livestock size in line with the four acres, and keeps the numbers to a level where the animals live the kind of life that is in line with her values. Katie’s customers find her by word of mouth and purchase meat and eggs as shares; she says “the demand is greater than the supply.” 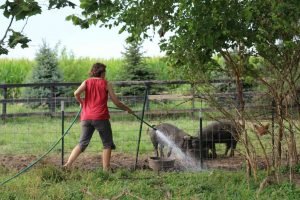 Katie loves her days on the farm because there are always problems to be solved, keeping things interesting. But it can also just be tiring and hard–like the time she went from milking one goat to milking three and then woke up in the middle of the night and couldn’t straighten her fingers out. Or the first time she tried getting 300 pound pigs onto a trailer that they didn’t want to get on to—but that time the problem solver in her came out, and she discovered that “Pigs will follow you anywhere if you have cheese curds!”