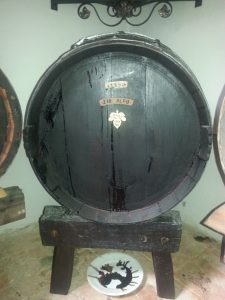 I’m home today, recovering from something nasty, and watching the snow blowing across our yard and turning into drifts.  So, in an effort to cast my mind back to a warmer place, I want to use today’s blog post as an opportunity to educate you about Balsamic Vinegar — the real liquid black gold from Modena, Italy.   When we were in Italy in 2014, we toured several Acetaia — places where balsamic vinegar is made.  And, I do mean made, not manufactured.  The process to make “Traditional” balsamic vinegar is a complex and time consuming one, and  is generally undertaken at a household/extended family level.  I found the entire process absolutely fascinating … and the taste testing was amazing!The first thing we learned is the general process for making grape must.  Must is the end product of cooking down grapes of one of two varieties (Trebbiano or Lambrusco), which must be grown in the Modena region.   The grapes are cooked over low heat until they lose about 50% of their liquid.  Once this is done, the must is transferred to storage containers where it sits for some time (up to several years) before being added into production.  Must is the only ingredient in traditional balsamic vinegar. 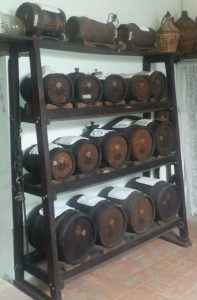 The production (such as it is) process consists of “batteria” of barrels in decreasing size (these barrels can be all the same wood, or a mixture of different woods).  The wood to create the barrels must be harvested from the Modena region, and the barrels must go through a ~10-year seasoning process before they can be used.  For this reason, almost all balsamic vinegar producers are also coopers, because adding new barrels is not a quick process.  We saw many barrels well over 100 years old (some with small leaks).  It may be hard to read, but the barrel in the top photo is dated 1890.  Balsamic vinegar barrels are a family treasure, and passed down for generations.  Most families have at least one batteria in their attic for personal use.The attic is used because the goal is to have the vinegar naturally evaporate over many years and attics are warmer than any other area of the house.  Each barrel has a square hole cut in the top of it with a linen cloth covering the hole to keep the bugs out.  This allows for the evaporation to occur.

The certification process is pretty interesting as well.  The Consorzio of Producers of Traditional Balsamic Vinegar of Modena oversees the production of balsamic vinegar and strictly controls the process to ensure consistency.  Each batch of vinegar is tested thoroughly, including a tasting by experts (assaggiatori) who guarantee that each vinegar has been produced in compliance with all rules, regulations, and procedures.  Each barrel in the batteria must be registered with the Consorzio (size, type of wood, year put into service, etc.).   Producers are not allowed to bottle their own product.  They must take the vinegar removed from their smallest barrels and put that into a container that is taken to the Consorzio.  The Consorzio then tests the vinegar and if it passes (only about half do) they bottle the vinegar (in the one and only approved glass bottle design), and return those bottles to the producer for labeling.   There are only two certified aging designations, 12 years and 25 years, but some producers sell vinegar aged at over 100 years.

One of the Acetaia we visited had a small chemistry type lab for testing their vinegar to make sure it would meet the requirements.   If a vinegar is “failed” by the Consorzio, it is returned to the family and that vinegar is added back into barrels for future aging, and hopefully a future passing grade.

One thing that I was not expecting was the impact of the wood on the flavor.  We tested from a mixed-barrel batteria, a cherry-wood, and a juniper wood — both the 12 and the 25 year.  The mixed-barrel was delicious and smooth, but the cherry wood had pronounced sweetness, and the juniper had a sharp peppery flavor.  We splurged and bought a few bottles.   Luckily, the bottles were less than 4 ounces, so I was able to bring them home in my carry-on luggage and not worry about baggage handling.   For my birthday, I want a batteria and some Trebbiano or Lambrusco grape plants.  In 20 years, I might have some of my own slightly untraditional balsamic vinegar to try!