Last Sunday, Rey and I decided to have some friends over for a little grill-out in our backyard. We are very proud of our backyard and have gardened it to within an inch of its life, which seems silly given that we rent our house, but it is our oasis and our escape, and we want to enjoy it. So we garden, garden, garden. And then we talk about inviting friends over to hang out and enjoy it, but inevitably we are too busy, or we forget, or we’re too tired. But, this time I just threw it out there and all of a sudden we were hosting some friends for a grill-out. 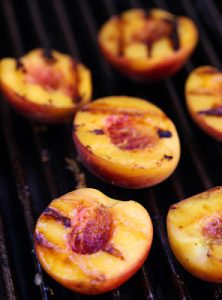 Now, one of my favorite things to do during the summer is grill. I don’t do it super often because charcoal can just be a pain sometimes. But when I do

grill, I go all in and will typically grill multiple parts of the meal. Also, we generally go all in when we have friends over, because that is just who we are and we both love to cook and entertain (ask anyone who came to our New Year’s Day brunch). So this was double the all-in…that’s a lot of all-in. We started planning the menu and decided on Triple S pork chops which Rey suggested would go great with grilled peaches from Mileur Orchard and Prairie Fruits Farm black pepper chevre. Now we just had to procure the main ingredients.

Here is the main rule we follow when grilling out (or cooking/entertaining in general): get it local and get it fresh, especially when it comes to meats. Nothing is tastier than a perfectly cooked piece of local, humanely-treated, pasture-raised meat (whether that be beef, pork, chicken, goat, bison, rabbit, etc.). So I picked up some butterfly chops from Triple S Farms and marinated them in a combination of leftover homemade salsa, some homemade spicy green tomato relish, 2-3 kinds of vinegar, and spices. I didn’t buy anything extra from the store for the marinade, I just used things I had in the refrigerator or cupboard already. When marinating something, whether it be meat, tofu, or veggies, don’t be afraid to be creative. Often times you can combine some condiments you have chilling in your refrigerator and make an amazing marinade without a recipe or buying extra things at the grocery store that you’re only going to use once.

So, once I had the pork marinating in the refrigerator, I started work on the sides. I had gotten some cabbage, green onions, bok choy, and daikon at the farmers market and decided to make a kimchi-style slaw using gochugaru, rice vinegar, white wine vinegar, a tiny bit of mayo, and some salt and pepper. For those of you who are interested, gochugaru is a coarse-ground red pepper that is essential in Korean cooking and the ingredient that gives Kimchi its characteristic red coloring. Gochugaru is really wonderful to have in the kitchen and can be purchased at almost all of the Asian markets around Champaign/Urbana. It is great for soups, noddles, pickling, meat (dry-rub), sauces, marinades, making kimchi, or playing around with Korean-fusion flavor pairings. 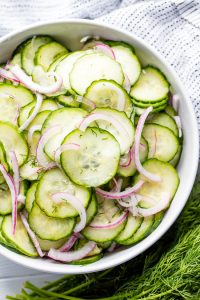 With the slaw done and sitting in the refrigerator, the flavors melding more and more, I still felt that I needed another dish. I realized that I had purchased some cucumbers from Blue Moon Farm at the market and decided that a cucumber salad would go nicely with the meal. Over the summer the two staples I try to keep in the house at all times are fresh, local tomatoes, and cucumbers. When it’s hot out and you just got home from work and you don’t want to do anything, having those two around make dinner (or just a snack) super easy. Nothing says summer like a plate of sliced tomatoes or a bowl of sliced cucumbers with balsamic vinegar, olive oil, and salt. Add some mozzarella from Ludwig Creamery or chevre from Prairie Fruits Farm and you have an amazing and refreshing meal.

So with the sides made and the pork marinating, I decided to prep the peaches. Now I had never grilled peaches before and all of the recipes I found online were treating them like a dessert. That was not what I wanted. Fresh, local peaches do not need a slurry of butter and sugar on top of them to make them delicious. So, the only common thread I noticed in all the recipes was that you just needed to cut the peaches in half, remove the pit, and brush the flesh with oil (I opted for sunflower oil since they were going on a very high-heat grill).

After completing all of the prep, Rey and I got to enjoy a beer in the garden before our friends arrived. Once they arrived we all relaxed, chatted, fired up the grill, and got to cooking. Butterfly pork chops do not take long to grill at all, especially with really hot coals, so always make sure to watch them, they should be slightly firm to the touch but still slightly springy when medium-rare to medium. I cooked one side of the pork (about 2-3 minutes) and then put the peaches around the edge of the chops while the second side grilled (another 2-3 minutes). With all of the food ready to go we all dug in.

Now, I had never had grilled peaches before, but after having them the other night, I will be grilling peaches all summer long. I’m pretty sure our friends will too. They went perfectly with the pork and the chevre. They were soft but not mushy, the skin stayed intact since I only grilled the flesh-side. They were, simply put, heaven on a beautiful summer evening. 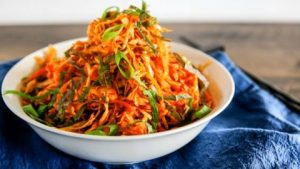