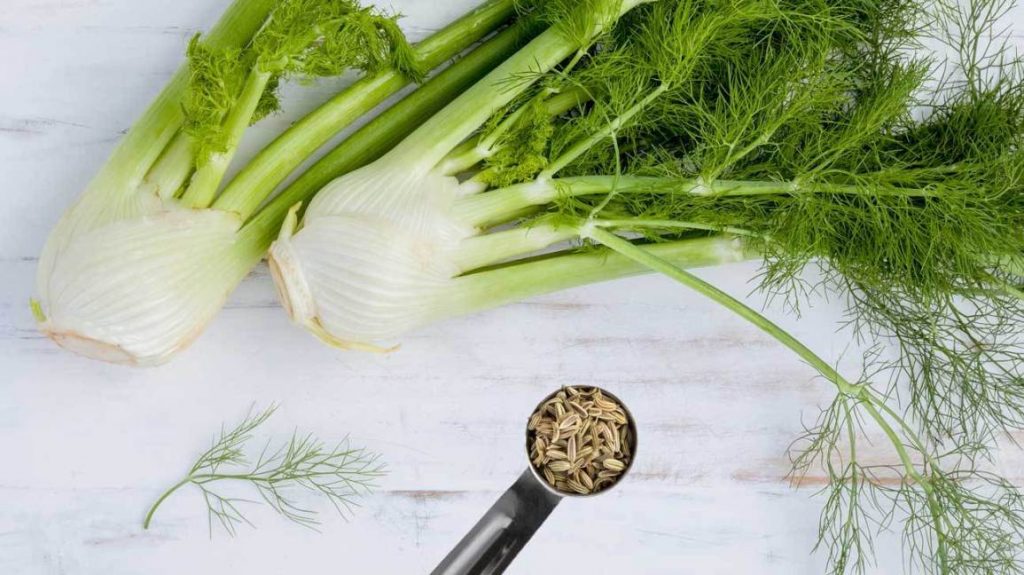 Fennel is another example of an herb or vegetable that I think gets overlooked quite often. Not only can you use pretty much every part of the plant, but it’s great for dogs and cats and their digestion. In fact, although I have no research or scientific evidence for this, whenever I give my dogs a few sticks of fennel, they totally mellow out and even get a little “saucer-eyed,” while having slightly better breath for an hour or so.

I personally love fennel because it is incredibly versatile and lends itself to both savory and sweet preparations, much like its cousin, the carrot. Also, planting fennel as an ornamental in your garden will attract the entire life cycle of the black swallowtail butterfly. It will play host to eggs, caterpillars, and chrysalis, but just be careful because a few caterpillars will devour all of the frond-like leaves of the fennel plant in a couple of days. If you remove a branch of the fennel with a mature caterpillar attached, you can put it in a jar and watch the chrysalis form and the swallowtail emerge. Then you can release the butterfly back into the wild.

So, not only is fennel beneficial to pollinators and insects, it’s incredibly delicious. But before you go planting an entire garden of fennel, you might want to learn about what you can do with it.

The Greek name for fennel is actually marathon, and the place of the famous battle of Marathon literally means ‘a plain with fennel.’ Fennel is indigenous to the shores of the Mediterranean, but has been naturalized around the world and is a popular ingredient in many cuisines. Beyond being used as an herb and vegetable in various cuisines, fennel is also one of the three main ingredients in absinthe, the alcoholic drink that was created as a medicinal elixir in Switzerland and then popularized for its hallucinogenic properties. In India, the plants are cultivated and the seeds are chewed after meals to freshen breath and aid in digestion. Although cultivated in many parts of the world, in Australia fennel is considered an invasive species and weed.

Fennel is an excellent source of protein, dietary fiber, B vitamins, and several dietary minerals, especially calcium, iron, magnesium, and manganese, all of which exceed 100% of the needed daily value.

When shopping for fennel, you will see it either with a majority of the stems and leaves still attached or with the stems cut off just above the bulb. Either way is fine, it just comes down to what parts you wanted and how much you needed. In the U.S. the fennel bulb is the more commonly used part of the plant, so you’ll tend to see them with the leaves removed unless the fennel has recently been harvested and is available at a local farmers market. Check for damage to the stems or bulb, and remember that fennel has a core that usually needs to be removed, so if you need a lot of fennel bulb you may want to focus on medium to larger bulbs or plan on getting one or two extra just in case. Keep in mind that the larger the fennel bulb the larger the tough part of the core is that you would want to remove.

Store fennel in a plastic bag in the refrigerator for up to two weeks. The delicate leaves will begin to go limp fairly quickly so wrap them in a damp paper towel before refrigerating. If your stems and leaves have gone limp, you cut the stems off from the bulb and stick them upright in a glass of water; the leaves will come back around much like celery.

All of the fennel can be used (the bulb, stalks, and leaves) in addition to the seeds, flowers, and fruit. Although edible, the seeds, flowers, and fruit you’ll have to buy separately. The bulb, stalks, and leaves each has a different texture and intensity of flavor so tasting each part to get a sense of how much to use is very helpful in preparation and cooking.

Remove the stalks and leaves from the bulb and rinse them separately (if they are still attached) and let them dry. Make sure to trim off any damaged or woody areas of the stalks. Wash the fennel bulb under cool water paying special attention to the areas where the stems sprout from the bulb as dirt can get stuck in the crevices. Oftentimes you’ll be preparing the fennel bulb in a way that requires you to remove the core, as you would remove the core of a cabbage. The easiest way to do that is to cut the bulb from top to bottom in half, then in half again, and then de-core the bulb by cutting it off at an angle. Martha Stewart also has a video of how to prepare fennel which you can watch HERE.

Raw: slice the bulb and stalks and put on salads. Raw fennel goes great with granny smith apples, chicken or turkey, and fresh berries. You can even use raw fennel with dips, add it to slaws, use as a replacement for celery, or eat plain. Plus, as noted before, eating raw fennel will even help freshen your breath.

Puree: chop and blend fennel in a mixer or food processor. Pureed fennel can be added to soups, smoothies, sauces, or dressings.

Garnish: the feathery leaves can be chopped and used as a fresh herb for seasoning or used as a garnish. It is a good replacement for dill, especially on baked or broiled fish with lemon.

Roasting: trim off the stalks and cut the bulb in half from top to bottom then cut into vertical half-inch slices. Toss the slices in olive oil, salt, and pepper; spread on a baking sheet and roast at 425°F for 25-30 minutes. Flip each slice over halfway through so it can carmelize on both sides. You can also roast quarters of fennel. Oftentimes roasting recipes will tell you to keep a little bit of the core on so that the layers stay attached to one another and are easier to flip.

Grilling: trim off the stalks and cut the bulb of fennel into halves or quarters. Brush the cut sides with olive oil and sprinkle with seasoning, place the cut sides down on a warm but not hot part of your grill and let them cook for 5 minutes or so, check them and flip as needed.

Sautéing: slice bulb and stalks and sauté with other veggies (onion, peppers, garlic, etc.) and add to pasta, grain salads, or eat alone as a side dish.

Boiling: chop fennel and boil in water for 20-30 minutes. Use the water to make tea (iced or hot).