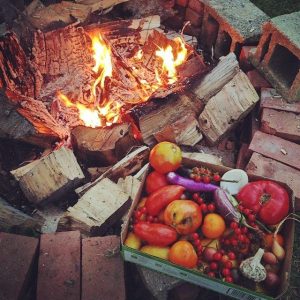 Creating this wall of logs made for some really hot coals.

A wood fire in the backyard is one of my favorite ways to cook. If you plan to have a campfire with friends, why not make use of the heat? It takes a little bit of planning to make sure you’re ready to control flames and coals, and requires a good supply of dry, split logs to keep things at an even temperature. But the reward? Smoky flavors, a highly social eating atmosphere, and a lot of the goodness of grilling without the fancy equipment taking up space on the patio. 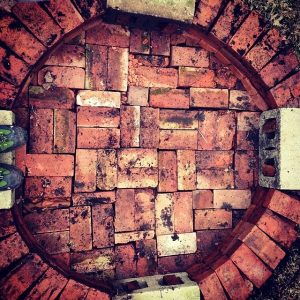 Before its slow descent into burntness.

Anyone who has gone camping of course knows the joy of cooking over a wood fire. But if you bring some of that joy home, you can do a lot more with what you’ve got available around you. Two summers ago, I made a very simple custom grill for my fire pit. It’s a grill topper like you would see on any round backyard grill, and can be found at a hardware store. I took two 6-foot galvanized steel straps (at the same store) and ran them through the grid of the grill, then two more the opposite way, so they formed a criss-cross pattern. The ends of these straps then rest on the edge of the pit and can hold the weight of any meats or veggies you might want to grill over a modest fire or hot coals. With the garden right behind me, I was able to walk through the garden, asking friends what they’d like to grill, and hand peppers and eggplants and squash over the fence to get sliced, quick-marinated, and grilled fresh. A cast-iron pan of sliced, parboiled potatoes fried up nicely in bacon fat. With a few good beers, some sausages and ground beef (maybe with chopped onion and a few hot pepper seeds mixed into a burger patty), our evening was set. 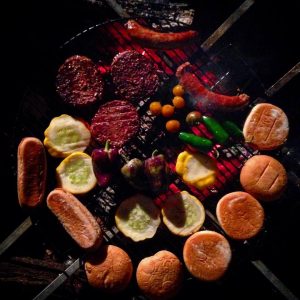 The heat on the summer squash, without flames, made them puff up a little like marshmallows, in terms of both flavor and texture.

As last summer drew to a close and the first frost loomed, I made another hot fire in my backyard fire pit. After getting a nice set of coals glowing, I pushed aside the ashes and arranged the coals in a ring in the outside of the pit. While they continued to smolder, I made a simple tower of bricks, four layers high laid crosswise, in the center of the pit. After pushing the still-hot coals back up against the brick tower, I put my custom grill on top. With this placed over the brick tower, just a little heat and flame was able to sneak between the grill and the bricks, creating even heat distribution. Finally, on top of all that went a giant stock pot, half-full of water. From there, it was open season. Anything that was left in the garden could be chopped and thrown into the pot, along with some potatoes, onions, and garlic that had been harvested earlier or bought from a local farmer. In the end, I had a smoky vegetable soup that lasted for a month and took almost no thought once the fire was hot. 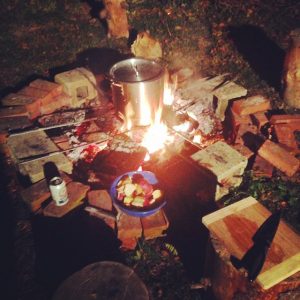 Fire, beer, and chopping vegetables in the dark: what could go wrong?

Grilling season approaches, and I’m looking forward to another season of flames, smoke, and delicious, fresh vegetables and meats around the fire with good friends. 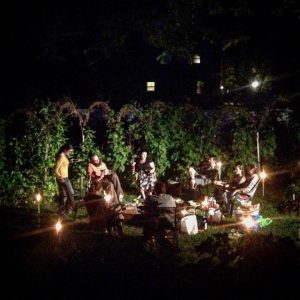