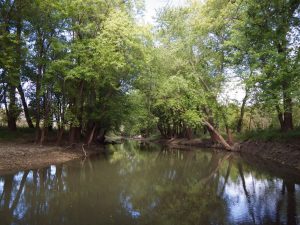 I had the pleasure of  spending last Sunday afternoon at the Sangamon River Forest Preserve near Fisher, Illinois. A relatively new park, it sits at a shallow spot in the river, surrounded by old-growth trees and restored prairie. It’s a lovely spot, with a history that illustrates how dramatically human intervention can reshape the landscape.

From personal experience, I know that parts of the preserve are unpassable when the river is high. Even if it’s not under water, the ground becomes so saturated that you run the risk of losing a shoe in the deep mud. That was a hazard often faced by early farmers in Central Illinois working some of the swampier parcels. Until tiling and other drainage techniques were introduced, large areas of land were simply unusable.

Draining the land allowed for farming, but it has had had its downside too. Excess fertilizer runoff is damaging the water quality of the rivers. Soil itself is being washed away instead of staying in the fields. Nutrient washed out of fields in illinois can help feed harmful algae blooms in the Gulf of Mexico.

Encouragingly, some farmers are adopting sustainable practices like adding cover crops to help prevent healthy soil from running off into the rivers. The possibility of more flooding like Illinois suffered this year has led to greater interest in establishing buffers zone of native plants around streams and rivers. Learning ways to adapt to environmental changes is part of farming because every year, there will be new challenges to face. That’s why our Central Illinois Farm Beginnings class brings in working farmers who have had to devise practical solutions to unexpected problems. it’s one thing to have the determination to face unexpected changes, but it’s another to have the knowledge and creativity to overcome them.