In this season of abundance, it’s worth taking a moment to appreciate the fact that just about every vegetable you eat, not to mention grains, started with a seed — a miracle of life inside a hard overcoat.

Seed, like life itself, is better when shared.  Yet, over the past week, the season of abundance and the culture of community ran up against the culture of bureaucracy, control, and fear as the Pennsylvania Department of Agriculture shut down the seed bank in the Joseph T. Simpson Public Library in Mechanicsburg, Pennsylvania.

A seed library is exactly what it sounds like.  Based on the model of a book library, and often housed in public libraries, people can peruse many varieties of tomato, cucumber, green bean, and other seeds, and then “check out” seeds they want to grow. At the end of the growing season, the person saves some seed, and returns it to the seed library. As more and more people have begun growing some of their own food, “seed libraries” have sprung up all over the U.S., with about 300 currently operating.

The benefits of a seed library are many and varied, from encouraging people to garden and try new varieties, to locally adapting heirloom seeds, to ensuring a supply of viable, fresh seeds, and fresh healthy foods, for each community.  What could be more American than this sort of self-sufficiency combined with interconnectedness?

In Pennsylvania, it turns out, seed-sharing is akin to agri-terrorism. Barbara Cross, a Cumberland County Commissioner, was quoted as saying, “Agri-terrorism is a very, very real scenario.”

Cross goes on to say that, “Protecting and maintaining the food sources of America is an overwhelming challenge . . .”  To which I would say, “Amen, sister!”

Yet while chemical and biotech companies have unleashed legions of transgenic plants, the toxicity and ecological impacts of which are unknown, state and federal departments of agriculture seem indifferent to that sort of meddling with “the food sources of America.”  Instead, they spend time and energy busting backyard gardeners who would share their seeds with others.

Of course there are valid state and federal laws governing seed companies, and these laws  protect consumers by ensuring that they are getting the seed they think they are, and that the seeds will germinate properly.   But these laws, intended to regulate for-profit seed companies, should not apply to non-commercial, non-profit, community-based seed libraries like the one in Mechanicsburg. Nor should they stop other seed libraries across the country from providing an important service. 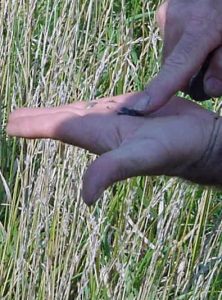 About the same time as the Pennsylvania kerfuffle, Bill Davison, University of Illinois Extension unit educator for Local Food Systems and Small Farms announced not only a seed library, but a food forest, in central Illinois. His press release sets the stage for these projects by saying, “A healthy local food system is like a healthy ecosystem, requiring a diverse array of partners working in collaboration to create resiliency and a high level of functionality.”

To that end, Davison and his U of I Extension team is partnering with the Normal Public Library to create a seed library, which will open on September 11.  It will include not only an array of vegetable seeds, but also nuts, bulbs for vegetables and flowers, and rootstock and scionwood for fruit trees. At the September 11 event, the U of I Extension local food team will give away free garlic bulbs to anyone wanting to plant garlic this fall to harvest next summer.

In addition to starting the seed library, the U of I local food team is partnering with the Town of Normal, the Savanna Institute, and Midwest Agriculture & Restoration Services to create the first urban “food forest” in a public park.  The food forest will allow people to see and harvest raspberries, grapes, gooseberries, apples, pears, hazelnuts, and chestnuts in a multi-tiered food forest.  (If you’d like to learn more about food forests, attend the Sept. 4 field day at PrairiErth Farm and see Liz Pegg’s food forest project.)

Stand Up for Seeds
Although governments’ crack-downs on seed libraries, and their simultaneous complicity with corporate ownership of seeds, is troubling, hope springs eternal . .. especially when projects such as community seed libraries and food forests are springing up around us.

At a time when consumers are demanding more information about who grows their food and how, we need more seed libraries and more people ready and willing to engage in civil di-seed-obedience!

NOTE: To learn more about seed-saving, register now for The Land Connection’s Sept. 27 workshop led by Vicki Nowicki, founder of the Liberty Gardens Seed-Lending Library, which serves the Downers Grove community in northern Illinois. Vicki will discuss the principles of seed saving, then demonstrate how to save lettuce and bean seeds on site at  Heirloominous Farm.