Back in February when I was sitting at the dining room table with my seed catalogs, I was planning big.

I had decided that I would go all out in the garden this year, and that my big crop would be tomatoes. Seduced by all the photos in the catalog, I lost all sense of how big our back yard actually is, and added Matt’s Wild Cherry (MWC) to my order. A couple of weeks later, in March—the month that pretends to hold the gift of spring–in the box of seeds that arrived on my doorstep was an entire packet with tiny, harmless looking (almost cute, actually)MWC seeds. Into the trays they went, and germinated, and grew into seemingly harmless little tomato plants.

In April, when it was time to transplant all 50 tomato plants outside—yes, I did this in April, because the little shop of horrors that had once been a home office, needed to be reclaimed—I put, I think, six MWC plants in the ground, in one end of one bed. Or so I thought that’s what I did.

So now it is August. I will admit that I have never really gotten a handle on all of the tomatoes that I planted this year—I intended to prune them, to trellis them, to maximize the pounds of tomatoes that would come out of the little garden on White Street—but the reality is that they got an early edge, and I have been under their control ever since.

Let’s just ignore the other six or eight varieties that I planted, and get back to MWC. I decided that yesterday was the day, I was going to go out and to harvest as many of them as possible, maybe even all the ripe ones. I told my family that if I did not return in an hour, to put together a search party. The thing is, the bed where the six plants were, well, apparently I actually put them in two beds, and now, of the 25ish tomato plants, all you can really see is a massive tangle of vines that overtaken the entire corner of the yard. And all of the gorgeous little clusters of MWC are deep inside the jungle—where they are nearly impossible to get to. My best efforts yielded me one basket of the itty bitty tomatoes. And by the time I removed them from the stems, and roasted them, I ended up with about one cup. But every one of those tiny little tomatoes is like a flavor bomb—it seems impossible that something smaller than a dime could pack that much punch, but they do.

How is it possible that the feeling you might burst out of your skin if spring doesn’t arrive, and that you might actually succumb to scurvy if you can’t pop a fresh garden tomato into your mouth, turns into, by August, fear of even walking into the garden. The torture of seeing the weeds take over the flower beds, the tomatoes fold over on themselves, and the cucumbers taking over pretty much everything, makes you feel like a bit of a failure. If only you had stayed on top of things…And by you, I do of course, mean me. I still have far more food than we could ever eat, and I am stuffing my freezer with enough tomatoes to continue pizza Sunday through the longest, coldest, grayest winter months, but man, it sure looks like a mess. Next year I’ll be on top of things, for sure.

And in the name of tomato season, here is a recipe from The Land Connection calendar, tomato tart: 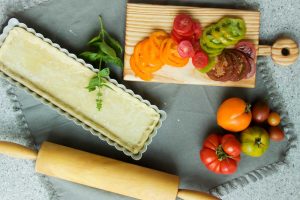 3 medium  tomatoes, sliced (this can vary, use cherry tomatoes too!)

¼ Cup grated cheese (use your favorite, I use a hard cheese like pecorino)

2 Teaspoons fresh herbs, minced (use whatever is fresh from your garden or the farmers’ market–I used rosemary) 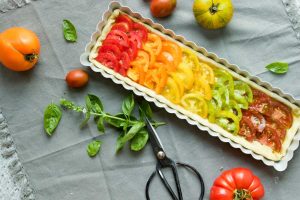