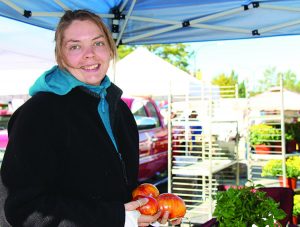 Shea Belahi talks about vegetables the way some people talk about their fellow humans. “Each variety has a name, a story, and great flavor,” she says. “It’s easy to have people connect with their food through the history of the varieties of vegetables we grow.” She’s a beginning farmer, but she knows how to grow, and she especially knows what she likes to grow. Heritage, variety, and flavor are the cornerstones of Shea’s niche. For the 2014 growing season, she’s setting those cornerstones out a little further, building a strong base for her business, Heirloominous Farm, at Prairie Fruits Farm and Creamery (PFFC) on the outskirts of Champaign.This arrangement is called farmer incubation, in which experienced and (literally) grounded farmers lease out a plot of their land to new farmers with some experience. Through this arrangement, they gain access to not just land, but also to the expertise and established markets of the farmers they lease from, while still running their own business. In this arrangement, Shea, a 2012 graduate of The Land Connection’s Central Illinois Farm Beginnings (CIFB) program, is leasing land from Leslie Cooperband and Wes Jarrell of Prairie Fruits Farm and Creamery. The Land Connection has partnered with PFFC for years now, but this is the first stride they have taken together to host an incubator farmer. 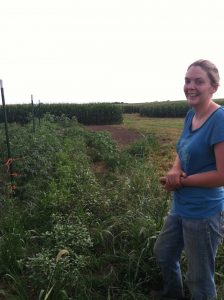 “I realized that we had these different enterprises all going on and how hard it was to stay on top of all of them,” says Wes, “but also what opportunities there were here for other people to do something. It seemed like an opportunity to help new people get into parts of the business in a realistic way but with a safety net.”

However, incubator farms also must be sustainable, meaning that the arrangement has to be beneficial to all. In addition to Shea paying a fair market value for the land and taking some of the work off of Wes and Leslie’s docket, her cultivation will fit well into PFFC’s long-term plans.  “We were going to be retiring part of the pasture paddock anyway, trying to intensively improve its soil fertility,” says Wes. “So this is an opportunity to take that land which hasn’t really had any inputs since we moved here [10 years ago], put about three inches of compost down, and let someone intensively grow organic vegetables on it.”

This year, Shea will be growing organic vegetables on as much as a full acre and will plant exclusively heirlooms, the sometimes strange, often forgotten, and richly-flavored predecessors of many of our modern vegetable varieties. Some of her favorites are Jimmy Nardello peppers, ground cherries (a citrusy sweet tomato relative), and Cosmic Purple carrots, which she describes as purple on the outside, orange on the inside, and delicious right out of the ground “soil and all!” She laments that “the food system is plagued by overly processed, nutritionally deficient, and tasteless food” and says she relishes “having the opportunity to educate the people who stop at my stand about growing and cooking our vegetables and then having them come back and rave about them. It means that for maybe one meal I have made an impact, taken a few dollars away from the companies who inflict this country with unacceptable food, and gotten us one meal closer to enjoying real food more often.”

Shea didn’t grow up on a farm but was always drawn to the vegetables that grew at her dad’s house in Monticello, getting in trouble because the garden was actually maintained by friends of his and she couldn’t resist munching the profits. A few years ago, after bouncing between subjects in college and then various jobs, she developed an interest in food, became a vegetarian, and discovered along with her husband that they loved fresh, local vegetables. “Amazing the taste difference that can make!” she notes, with a sly look on her face. Farming, however, did not occur to her until she saw an advertisement for the Central Illinois Farm Beginnings class and realized that, not only did farming not have to be about conventional crops and practices, but that she could, in fact, do it herself. After convincing her husband that she should take the course (she describes him as very supportive, but that he sometimes needs a thesis to be persuaded on matters like this), she applied for and received a scholarship from The Land Connection and started Farm Beginnings in October of 2011. “Business planning,” she says with a sigh, “was tedious, frustrating, and a great learning tool.” She pulled through, and the foundation for Heirloominous Farm was built. 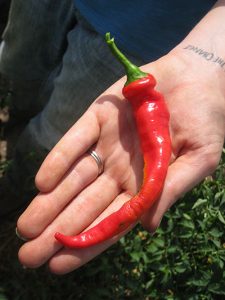 In the summer of 2012, she mentored with Marty and Crystal Gray, themselves former graduates of the Farm Beginnings course who now own and manage Gray Farms in Watseka, and this past year she planted vegetables on a quarter acre of her uncle’s land in Mansfield. While there were some major setbacks in the 2013 growing season, she still grew and sold a considerable amount of produce, and is wholly prepared to expand from just her stand at the Urbana Farmer’s Market to selling wholesale to Dancing Dog restaurant, the Common Ground Co-op, and Pizza M in Urbana, and also to Alisa DeMarco, the chef at PFFC who will use Shea’s vegetables in conjunction with fruits and goat’s milk that Wes and Leslie produce.With Shea’s promising markets, her business plan, and her experiences with Farm Beginnings, the Grays, and her own growing, Wes and Leslie are feeling very confident about the incubator relationship. “She seems like a high-probability candidate for success”, says Wes, and Leslie chimes in, “there’s no rose-colored glasses. Because she’s already had her own experiences, she’s realistic and she’s starting small. While there may seem to be a saturation of vegetables at the farmer’s market, I think there’s lot of other opportunities to meet the demand for locally grown vegetables with her heirloom niche. As [these kinds of farms] get bigger, they’ll be able to tap into the bigger market opportunities. She seems to understand that the market is competitive and so she’s got a CSA plan, the restaurants where she’s a major supplier… I could see her being specialized in that way.”

When asked where she hopes to see herself in the future, Shea says she’d like to have a farm someday that has an educational aspect available to low-income people so that they have access to new skills. Plus, she notes, “seeds are cheaper than produce.” She has other ambitions as well, such as the possibility of working the land with recently released felons and operating a “mobile veggie operation” that brings produce to food deserts at affordable prices. But she’d also just like to have her own place someday so “I can do whatever the hell I want.”

In the mean time, she is grateful and prepared for her upcoming season at PFFC. The access to land, to her, “means potential, hope, fear, the chance to really grow. It means so many things. I’m excited to see the potential of the land. I am a little nervous…but I’ll have them there to help me.” Besides, she wonders, “Why do we need growing produce to be easy anyway?  When did it become acceptable to denounce and even chastise hard working individuals? On days that I am covered in sweat and mud and have gotten a ton of things done on my farm, I am full of pride and am pumped that I was able to accomplish so much. I get to be in the sun and fresh air using my body to its fullest capabilities to provide food to a community that I love.  It is the most rewarding work I have ever done.”