I moved from Chicago down to Urbana 3 years ago.  I had started getting involved in the local food scene in Chicago but after living there for about 25 years I was feeling burnt out.  I needed a change but at the time I had no idea what that change would look like.

While living in Chicago my husband and I were frequent shoppers at The Green City Market and Prairie Fruit Farms was one of our favorite stops.   So soon after moving down, I reached out to Wes and Leslie.  I started volunteering at the start of the 2016 kidding season.  I was immediately hooked.  Soon I came out for not only my volunteer shifts but any shift where I had free time.  I was odd-jobbing it at the time, so I had plenty of free time. 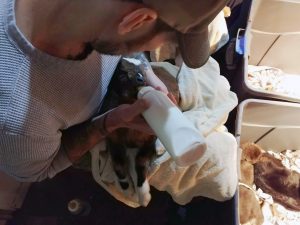 About a month after I started, I brought my husband out to work with me and he was soon also hooked. This is really when our adventure with the local farms and farming in this area began.

We weeded gardens and bottle-fed baby goats, but mostly we focused on the less glamorous chores such as changing bedding, liming stalls, filling the self-feeders, carrying buckets of feed, and hay to the older does and bucks, pretty much anything that needed to be done that day.  We felt the honesty in getting our clothes and hands dirty, really dirty. 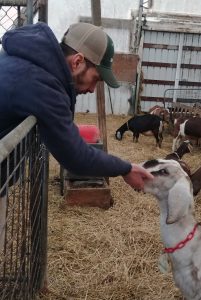 During my first kidding season, I helped Leslie help a doe that was having a breech birth.  I really just helped hold the doe still and worked to calm her.  I found myself saying to the doe “It’s ok girl.  Yes, I know, I know. It’s ok.” As if I had any real idea what the poor doe was going through.  After about 10 minutes of hard work for Leslie and very hard work for the doe, a buck was born. 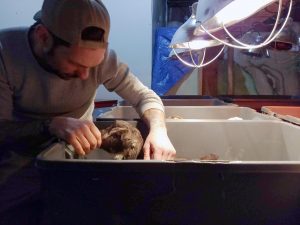 By the end of that season, I was milking the does at 5:30 am several times a week.  This is when I discovered one of the most important things the does bring me.  My mind often races forwards and backward, to the left then to the right, from the past then to the future.  I’ve always had a hard time quieting it.  During milking, I’m completely in the moment, in the present and centered.  It is just me, the rhythmic sound of the inflators, and the does. 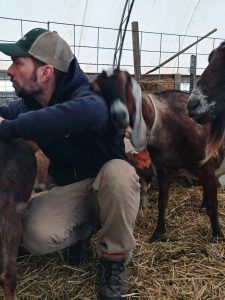 Since moving here, I have immersed myself in the farm community and local foods.  I’ve been and remained involved with various farms including BlueMoon.   I even tried my hand at creating a sustainable bakery based on local foods, Lucky Pierre Bakers.  Prairie Fruits, however, has a special pull for me.

Once again it’s the time of year that Prairie Fruits starts to reawaken after its brief winter slumber.  I find myself called back, not just by the new additions to the herd, but for my own need for the peace I find with the does at 5:30 am.