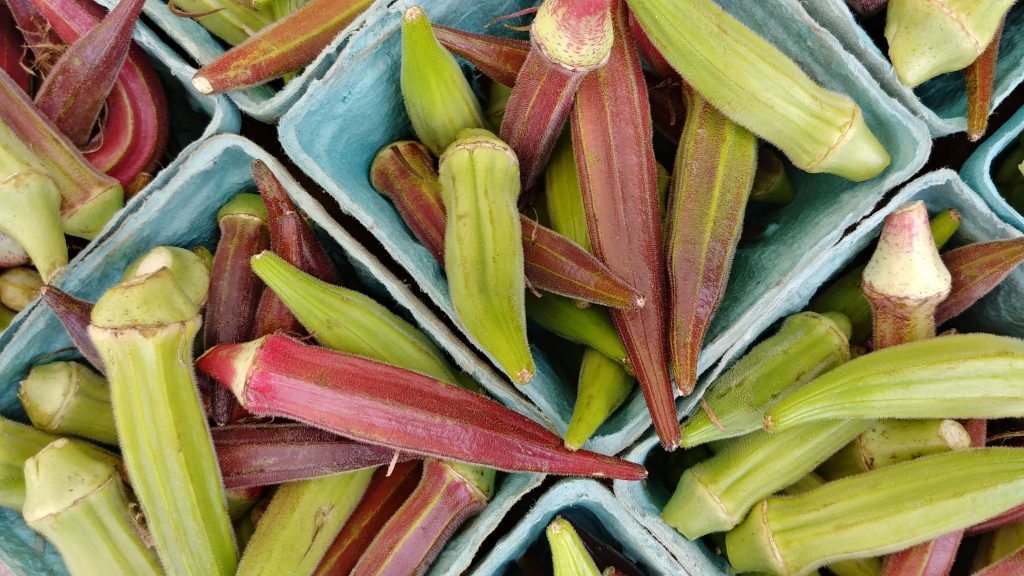 Okra is another one of those poor, misunderstood vegetables that gets a really bad rap. Between people thinking that okra is always slimy, even when raw (it’s not btw), to people dismissing it because they don’t know what to do with it, okra doesn’t get much love. Well, I love okra. I love munching on raw okra pods while I’m working at the farmers market. It’s just a nice vegetable to munch on. Nom, nom, nom!

So, if you haven’t gotten around to grabbing some delicious fresh okra at the farmers market, you should definitely do it soon. Okra is in peak season and the warmer weather has it producing at breakneck speed. Farmers always end up with way too much okra, but they can’t help that the plants are super productive and the general public doesn’t eat enough of it. Eat more okra! Let’s learn a little bit more about okra and then you can go buy some with a bit more confidence or at the very least, more interest.

Okra, also known as “lady’s fingers”, is related to cotton, cocoa, and hibiscus. It is one of the most heat- and drought-tolerant vegetable species in the world. This is probably why it always starts producing really well when the summer gets hot and a bit dry. Dried okra pods have become popular in floral arrangements and general home decor, especially in the late summer and early fall. I’m not entirely sure what brought on this popularity, but owls and okra pods seem to be big right now. Okra is used in cuisines around the world and compliments tomatoes, onions, corn, shellfish, and fish stock. Okra has a subtle taste, similar to the flavor of eggplant, and works well with a wide array of spices and seasonings.

Okra is a powerhouse of valuable nutrients, nearly half of which is soluble fiber in the form of gums and pectins. Soluble fiber helps to lower serum cholesterol which can reduce the risk of heart disease. The other half is insoluble fiber which helps to keep the intestinal tract healthy which can help to decrease the risk of some forms of cancer, especially colorectal cancer. Raw okra is rich in dietary fiber, vitamin C, and vitamin K. It also contains moderate amounts of thiamin, folate, vitamin B6, and magnesium.

Choose okra pods that are between 2 and 4 inches long. Longer okra can be used, but they won’t be as flavorful and can be woody. Some varieties, especially those with thin flesh, can remain tender despite getting big, so when in doubt you can always take a munch on a larger pod and see what you think.

Place fresh okra in a paper bag or wrap pods in a paper towel and place in a perforated plastic bag. Store okra in the refrigerator for 2 to 3 days. Okra may last longer in the refrigerator but the pods will begin to turn brown. For long-term storage, okra may be frozen or pickled. To freeze okra, trim the stem ends, but do not cut into the pod when you trim, and then blanch the pods (see instructions below). Freeze whole or sliced pods in air-tight containers or freezer bags.

Run okra pods under cool water and pat dry. If the pods are fuzzy, use a damp paper towel to gently rub the skin of the pod to remove the fuzz. If there is a portion of stem still attached to the pod use a knife to remove it. If you’re preparing okra whole, try not to cut into the pod when removing the stem. If you’re preparing sliced okra then you can just cut the stem off completely.

If you’re cooking sliced okra, you can prevent the pieces of okra from getting slimy in a few different ways with varying degrees of success. For a complete rundown of ways to de-slime okra, check out Parsley & Pumpkins’ blog on How to cook slime-free okra. If you’re cooking okra whole, frying okra, or adding chopped okra to thicken soups, stews, or curries, then you really don’t need to worry about de-sliming it.

Raw: eat raw okra pods whole or slice them up and add to salads. You can even lightly dust them in a spice mixture and eat them as a snack.

Sautéing: cut pods into slices or in half length-wise and sauté with other vegetables (peppers, tomato, eggplant, onion, etc.). You can also sauté them whole. Eat as a side or stir-fry with rice or noodles.

Frying: slice the pods into ½ to 1-inch sections or leave whole, batter with egg and cornmeal, and lightly fry in a pan of oil until golden brown. This is by no means the only way to fry okra. There are many different batters that you can use for fried okra so don’t be afraid to be adventurous and try something new.

Roasting: slice the pods into ½ to 1-inch sections or leave whole, spread out on a rimmed baking sheet, and drizzle with olive oil and desired seasoning. Roast at 425°F for 10-15 minutes, or until the okra has started to brown.

Blanching: leave the pods whole (stem trimmed) and drop in a pot of boiling water. After 3-4 minutes strain out the pods and quickly drop them in a bowl of ice water to halt the cooking process cooking. Whole okra is often blanched before being sliced and added to soups or stews as a thickener.

Pickling: leave the pods whole (stem trimmed); pierce each pod 3-4 times with a fork to break the flesh; stuff mason jar with pods, garlic, and other herbs; fill the jar with boiling pickling solution (vinegar, water, salt, and spices). Let cool. Cover and store in the refrigerator or can for long-term storage ina cupboard.