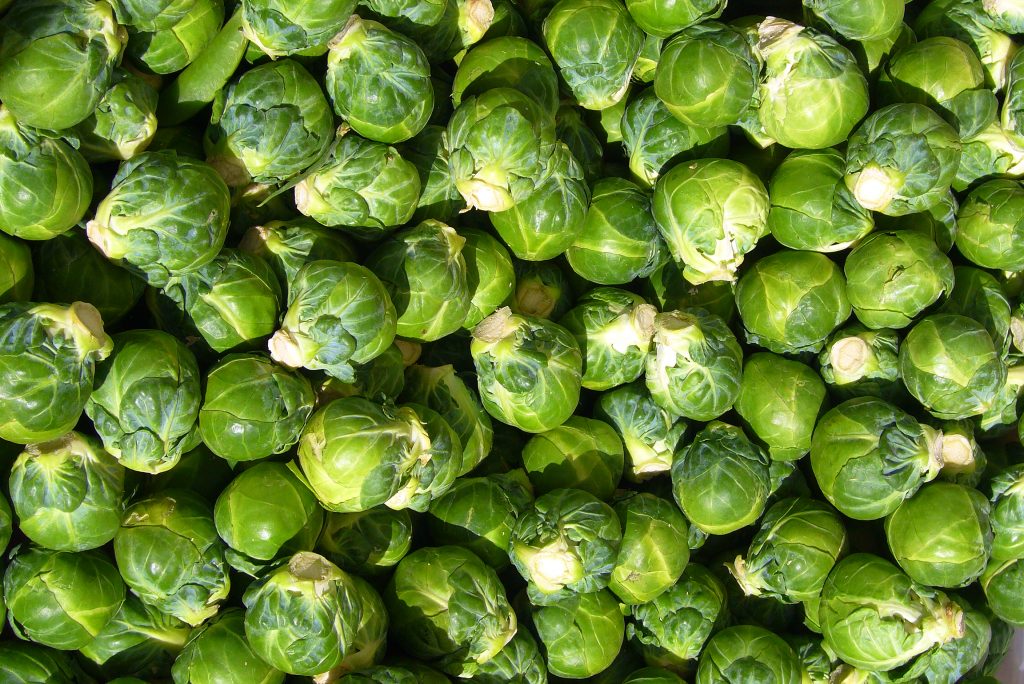 With Thanksgiving upon us and the last remnants of fall clinging desperately to ever barer trees, it is time for the heralded return of fresh Brussels sprouts. Now, many people avoid Brussels sprouts like the plague. Oftentimes this stems from some traumatic childhood experience that involved frozen sprouts that had been steamed to death and resembled warm mushy balls from the black lagoon. Inevitably you were forced to eat them before you could have dessert or leave the table. You screamed, protested, crossed your arms in anger, and pleaded; all to no avail.

Now you’re an adult. An adult that realizes that Brussels sprouts, namely FRESH Brussels sprouts, are delicious when cooked properly and not left idle in a steamer basket. They are delicious mini-cabbages that lend themselves to all sorts of fun flavors like mustard, balsamic, bacon, and cranberry. They don’t have to come from the freezer section and are probably available at your local farmers market or grocery store. You don’t have to overcook them. They grow on a stalk!!

These little balls of green are absolutely wonderful, so let’s go over some of the dos and don’ts of cooking Brussels sprouts so you don’t traumatize your children.

Their flavor, sweetness, and tenderness improve with exposure to frosts, so you will often find fresh stalks of Brussels sprouts available after your first local cold snap. They are native to the Mediterranean region, as are other cabbage species, however, Brussels sprouts first appeared in northern Europe during the fifth century. They were later cultivated near Brussels in the 13th century, which is where they got their name from. It is also why you see Brussels sprout always spelled with a capital ‘B.’

Brussels sprouts are an excellent source of vitamin K, vitamin C, and B vitamins, and contain many essential minerals including iron, manganese, and phosphorus. Excessive consumption should be avoided by those taking anticoagulants due to high vitamin K levels. Also, unlike most other green vegetables, Brussels sprouts are rather high in protein. The protein, however, is incomplete as it lacks the full spectrum of essential amino acids so combining a serving of Brussels sprouts with a serving of whole grains, brown rice, or quinoa will make them complete.

When buying fresh sprouts there are two options. The first option is to go to the grocery store, farmers market, or co-op market and buy sprouts by the pound (i.e. you will be buying individual sprouts). The second option, which is more common at farmers markets and food co-ops, is to buy them by the stalk. Now buying Brussels sprouts on the stalk can have the added benefit of staying fresher for longer and retaining more nutrients post-harvest. Also, the stalk is very similar to the stalk of broccoli and can be used in many of the same ways, it just has to be cooked for a longer period of time to generate decent flavor (I suggest roasting). Whether you’re buying individual sprouts of a stalk of sprouts, you still want to look out for any damage of brown holes from cabbage worms and you want your sprouts to feel “full” when you touch them as that means they’re fully developed.

The fresher the sprouts, the better the flavor, so refrigerator storage should not exceed a day or two. Remove any damaged or irregular outer leaves and store fresh unwashed sprouts in plastic bags in the vegetable bin of the refrigerator. Although not ideal, sprouts should retain their integrity in a refrigerator for up to 1 week. After that point they will begin to lose some nutrients, their color will change, and they will increase in odor. Brussels sprouts may be frozen for long-term storage. Simply blanch them (see instructions below), rinse in cold water, drain, and let dry. Spread them out on a baking sheet and put them in your freezer. After they’re frozen, pack into air-tight containers or freezer bags. Freezing them this way will prevent them from clumping together in a frozen mass of green.

Rinse and cut off the tough bottom part of the sprout and peel off the two outermost leaves. For most cooking techniques Brussels sprouts can be left whole, halved, or quartered. Boiling will cause Brussels sprouts to lose some of their nutritional value so steaming, stir-frying, or roasting are generally preferred. The leaves cook faster than the core, so cut an X in the bottom of the stem for even cooking when cooking the sprouts whole. As a rule, when Brussels sprouts have lost the bright green color, they are overcooked and have lost a considerable amount of nutritional value as well. This is one reason why many people prefer roasting Brussels sprouts.

Boiling/Blanching: submerge in salted boiling water, and let them cook for approximately 4-6 minutes or until they are tender, but not mushy. If you are eating them hot as a side dish then boil them closer to 4 minutes as they will continue to cook after removed from the water. If you’re blanching them you’ll want to cook them closer to 6 minutes (but still watch their tenderness) and then dump them into a bath of ice water as soon as they are tender to halt the cooking process. Boiled sprouts can be eaten warm with garlic butter or mustard while blanched sprouts can be marinated, added to salads, or frozen.

Steaming: place on a steamer rack in a pot with about an inch of boiling water. Cover the pot and steam for approximately 5-7 minutes, or until they are tender, but not mushy. You can eat them warm as you would boiled sprouts, or cool them off and eat cold in grain salads.

Roasting: toss with olive oil, salt, and pepper, and spread out on a baking sheet. Roast at 400°F for 30-40 minutes, or until the outer leaves crisp and brown and the sprouts are tender. Roast with dried cranberries, cooked bacon, or slivered almonds for added flavor.

Sautéing: toss with olive oil or butter, salt, and pepper, and sauté in a saucepan until tender. Add other veggies or proteins for a delicious stir-fry os simply eat as a side with a balsamic glaze.

Soups: add sprouts to hearty soups or puree cooked sprouts with onion, garlic, and some chicken stock for a Brussels sprout soup. If adding sprouts to soups, cut the sprouts in half or quarters so that they cook all the way through and are easy to fit in one’s mouth.