Story. Personality. Soul. I have discovered of late, in my new work with The Land Connection, that it is these things, not corn or milk or hayrides, that the new wave of entrepreneurial farmers is selling.

This year’s MOSES conference was rife with this sentiment. “You are superheroes,” Mark Shepard told us. “Your story is more valuable than anything you can grow.” At the annual meeting of the Central Illinois Sustainable Farming Network last week, Atina Diffley, author of Turn Here Sweet Corn, told us that, even in wholesale marketing, “you have to sell more than your produce”, and she noted a particular moment in her farming career when she could have burned a bridge with a customer but did not, and had her patience pay off years later in the form of a major new opportunity. Most poignantly, Alan Guebert remarked in his Saturday keynote at MOSES that “this is about more than soil. It’s about soul.”

This is not necessarily unique to the farming industry. You can’t sell most things or run a business with a terrible personality, and having even a highly stylized version of the story of a product can draw in customers (see the corporate version of the origin of McDonald’s versus the grittier true story). But the combination of a good story, a winning personality, and a rich soul is indeed critical and, if not unique to farming, certainly is more prevalent than many other industries. 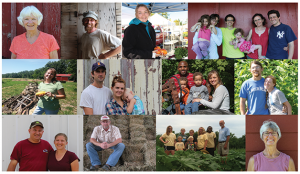 I have found this to be readily apparent anywhere you can see farmers in aggregate. The MOSES conference is a good example, which our executive director Cara Cummings describes as “a gathering of 3500 really nice people.” How many conferences can you say that about? Similar was my experience working in the call center for Johnny’s Selected Seeds. People often say to me, “oh you worked in a call center? Must have been awful!” They’re usually looking for war stories, but I really only have one. One truly bad customer in two seasons on the phones, and she was just a farmer who was stressed for very legitimate reasons. Johnny’s has some of the kindest customers in the world, who loved to ask how the weather was up in Maine and what I was planning on growing that season, and would even invite me to visit their farm if I was ever in Kentucky or Hawaii. These are farming folks, gardening folks, people who love the earth and other people. I couldn’t say if the farming or the goodness comes first, but it pervades.

These excellent personalities plus the stories, the personal histories, that have lead people to a life of farming can help us understand that third, more ephemeral ingredient: soul. Again, this is something that you can at least begin to grasp when you’re amongst farmers. Whether it’s the incredible Band of Farmers talent show that I was lucky enough to attend after this weekend’s Good Food Festival in Chicago or the faraway look you can still sometimes catch on a farmer’s face when they’re looking at their crops, there is a respect and a love for the craft of farming that transcends the nickels and dimes and the bleak mornings and the backache. When I attended the Farmer to Farmer Conference in Winterport, Maine this past December, a prevailing subtext was “boy, another rough year!” Most of these farmers weren’t talking about how to maximize their margins; they were concerned about having any margin at all. And yet, no one was talking about quitting. There were still smiles around, and plans to always do a little better next year, to take what they could from the conference and grow a little more. They’re not crazy, or stupid. They just love their work. There is more than economic value to that arduous life. They do it to protect the land, to feed their neighbors healthy food, to be a part of a better future and a more resilient global community. As I often say to my students, you have to be profitable in this business, like any other, but if you’re getting into farming for the money alone, you’re going to remain unhappy. You must make value elsewhere. 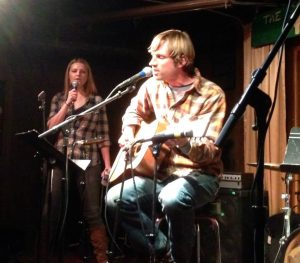 Marty and Crystal Gray, CIFB graduates and owners of Gray Farms Produce, perform at the Band of Farmers talent show at The Hideout in Chicago, 3/15/2014.

Two of our students this year are business partners, friends, and also veterans. One of them recently lost her husband, but from this gained a farm which she is now attempting to turn around into something positive from a terrible experience. The other recently lost a good friend, a veteran, to suicide brought on by post-traumatic stress disorder. She told his story as part of their final presentation for the Farm Beginnings class. She choked up, and I choked up, and we all felt the weight of her loss and the toll that military suicides take on our country everyday. But then, she told us their plan. They are starting Blue Yonder Organic Farm together, and it would be a refuge and a place of healing for veterans in Indiana who were struggling with the after-effects of serving in combat zones. They took our course to learn how to write a business plan, but it was so they could maintain their larger efforts. The value of their farm is more than the food, or the income, or a nice house in the countryside. It’s about healing for the sick and the broken of spirit, about compassion, about finding a light in the dark. It’s about soul.