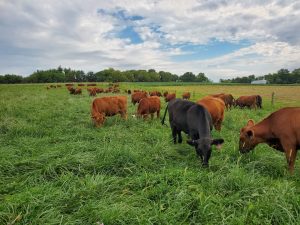 As a producer, I recognize the benefit of rotational grazing versus set stock grazing. In 2008 we expanded the pasture on our farm to include a total of 90 acres of former cropland plus about 20 more acres of a combination of timber area, and some riparian area that is only grazed a few days per year.

With the additional crop acres of established pasture, I had the ability in 2010 to take some acres out of the grazing rotation and let them grow for winter stockpile grazing. The first year, 30 acres were allowed to grow all fall starting in mid-August until late November while the cattle grazed the other paddocks. I read grazing articles explaining there would be a benefit to restricting the forage available to the cattle when grazing the stockpile since there would be no regrowth until spring. This could be done using portable fencing equipment. I bought 2 geared reels, poly-wire for both, and a box of step-in posts.

I worried whether the cattle would respect the poly-wire, how much power could those tiny stainless filaments actually carry, and so on. The first winter the portable fencing worked well, my biggest issue was learning how much forage to supply the 40 cows so they had plenty for 24 hours. I didn’t want them to overgraze the strip to get what they needed. I quickly learned through trial and error at first how much area to give them each day.  There is no need to back-fence when grazing stockpile since there is no regrowth occurring in winter. It was a simple process, I had one fence in place across the paddock so the cows could graze up to it. The fence for the next day was also in place further into the paddock. Each day I took down the first fence and rebuilt it further over for the following day’s move. The cattle quickly learned the routine and were waiting when they heard me coming on the 4-wheeler.  I need to mention these are small paddocks between 4 to 10 acres in size so the cross fences average 400’ with the longest being about 1000’. The first winter I walked to roll up the poly-wire and pull the posts, but soon learned how to could the fence for the next day while riding the 4-wheeler. By the end of that first winter’s grazing, I could move the fences and be back at the house within 30 minutes.

I had always checked on the cattle at least once every day anyway so I didn’t feel there was any more work involved and grazing the stockpile was certainly a much cheaper way to feed the cattle than feeding hay, plus they were spreading their own manure for me. The only hay fed before the stockpile ran out was once when rains made the pasture too soft and I had to pull them off for 2 or 3 days. An added benefit I hadn’t anticipated was how I was able to watch the cattle move into the new forage while I was moving the fence. Any problems such as a foot problem or anyone not feeling good is noticeable right away.

The stockpile ran out that first winter in late January, and I fed hay until grazing could begin in spring.  The benefits of strip grazing are the same in many ways during the normal grazing season. I liked how it managed the hoof traffic when the ground was soft. The cattle spend 90% of their time in the new strip and if it’s muddy I can simply move more often and avoid damaging the pasture. I decided to continue strip grazing year-round.  Manure and urine distribution is much improved by the strip grazing. That is important to me because I have not used chemical fertilizer on the perennial pasture for 4 years so far.

The fertilizer from the grazing cattle along with the trampled forage from the “graze half and leave half” practice has started the nutrient exchange between the soil microbial population and the forages. Strip grazing at mid-maturity of the forage results in more trampled residue and it was difficult for me to accept that forage was not wasted. The opposite is true, there is value for sustainability. The residue mat keeps the soil cooler in summer so there is less evaporation, more moisture is available for plant growth.  The moist cool soil is also a benefit for the microbes that make up the soil food web. The more microbial activity the better for the pasture. The mat also keeps the soil a little warmer in winter which also benefits the microbes and plant roots. When heavy rains occur the soil is protected by this residue which slows the water movement and allows more to infiltrate the soil. More of the rainfall becomes effective rainfall available later for plant growth and as a result, there is less runoff and less erosion. At any given time during the grazing season, in addition to the residue on the surface, a large majority of the farm has more than 6” tall forage in the paddocks so the soil is well protected.

Before I started strip grazing, the cattle were given a whole paddock at once to graze. I was disappointed often at how uneven their grazing was. The areas they favored in each paddock would be overgrazed while other areas might be barely touched. The cattle also lounged in the same area of the paddock every day the whole time they were in it so manure and urine were not spread out like I wanted. The change to strip grazing helped me achieve more even grazing and better manure distribution throughout the entire paddock, not perfect of course, but much better.

I mentioned earlier the benefit of watching the cattle move into the fresh forage each day as a chance to see any problems that may be developing. I had a cow contract anaplasmosis in September 2016. When I noticed one day she failed to move into the fresh grass I coaxed her to move in and join the others. This cow had a normal appearance and if not for the unusual behavior there was no indication of any health problem. The second day she was more difficult to get up, and she wasn’t letting her calf nurse. The veterinarian was called and we got her treated the same day. She was fine and weaned a good calf. I may have lost her if not for the early detection of the disease.