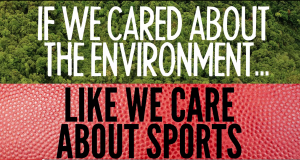 One of my coworkers showed me this silly little clip a few months back. I watched it, chuckled a bit, and then quickly forgot about it. The big game that we have all heard so much about this past weekend, however, brought it back to mind.

THE SUPERBOWL. It’s a big deal. From diehard football fans to fairweather ones, from those who hate both teams to those who root for their favorite uniform color, chances are they watched the Superbowl (even if just for the commercials. And on that note, who has ever heard of anyone watching anything for the commercials?! That’s how big a deal it is. But I digress).

Now don’t get me wrong. I love NFL football. During the season, I spend my Sundays, Mondays and Thursdays yelling at tv screens and sobbing over my fantasy football team. My favorite Christmas gift last year was my (second) quarterback’s jersey. I am familiar with the love of the game.

What got me thinking about this video was not the national fascination with just an admittedly violent sport, but rather, how enthusiastic people who did not regularly watch football or who weren’t fans of the team actually became. I was heartbroken over my team narrowly missing their chance to play in this final battle and as such, noticed the contrast between myself and the roaring fans around me. I just couldn’t quite work up the heart to care very much.

Which brought me back to this video. What if people cared about the environment (or local food, or poverty, or racism, or sexism…) as much as they cared about sports? Of course there are some that do, some that have that drive and passion, and thank goodness for them. But most people claim to believe in these causes without showing it. I just wonder what the world would be like if everyone stood up and shouted for what they believed in. Would it be a riot? Or would we, maybe, get closer to seeing what it is that people really want, what is good for them and for society. Even conflicts can only be resolved when people say what they really care about.

Perhaps it’s a ridiculous idea. But I think we could all do with a little more passion for the things that really matter. Don’t worry, there’ll still be plenty left for sports.