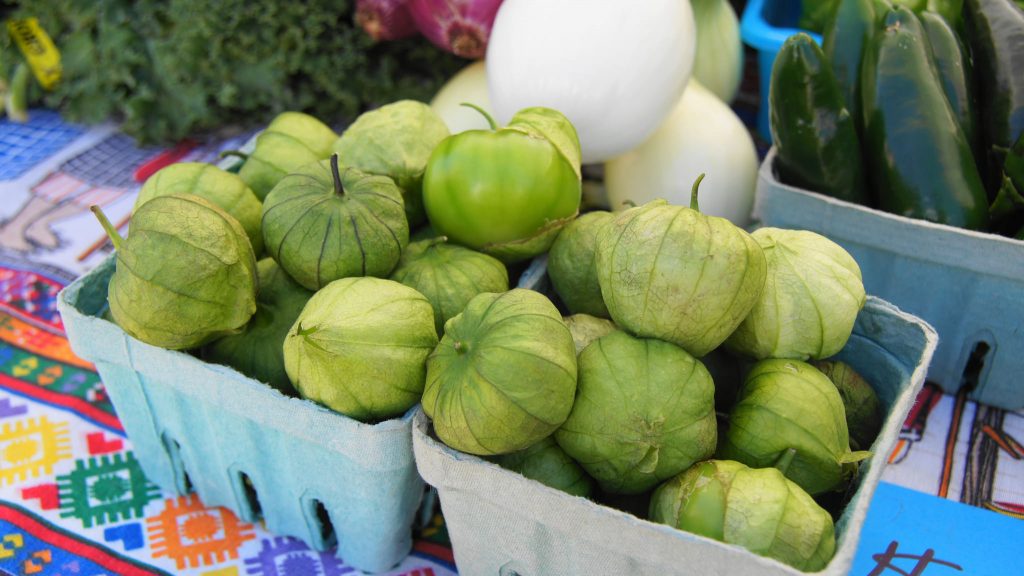 While visiting relatives in Pennsylvania over the 4th of July, I rediscovered my love for tomatillos. Rey and I were preparing a meal for my extended family and decided to source everything locally. We were hitting up several farmers markets and farm stands around my parent’s farm. We got everything we needed but realized we didn’t have a sauce planned for the grilled skirt steak. Then we saw some beautiful tomatillos mounded in rows of quart containers. They looked too good to pass up.

We pondered what we could do with them that wouldn’t just be salsa verde. After bouncing ideas off of one another, Rey had the wonderful idea of making a sauce with tomatillos and mint. That was it. We bought the tomatillos, got some fresh mint, and headed home. That afternoon I concocted the recipe back at the house and it turned out to be a hit with the grilled skirt steak. While writing this blog, I can’t stop thinking about that sauce. I also can’t stop thinking about the fact that I haven’t had tomatillos in such a long time. I miss tomatillos.

Tomatillos should be available now at your farmers’ market unless someone in your area doesn’t grow them. You might be able to find them in your grocery store, though I would personally only get them locally as the husks can get a little gross while being shipped and sitting in a grocery store produce section, especially if they’ve gotten wet (at least that is my experience). You might be able to find them de-husked at your grocery store too.

When they’re in season, get them fresh and get them locally. You can even de-husk them and eat them raw. They are really delicious raw. They are typically sweet and a bit tart like a Granny Smith Apple, but not as sweet as ground cherries. Their skin is a bit sticky but that is just the way they are, although it can be off-putting. So let’s take a look at things you can use tomatillos for so you can go get some before they’re out of season. Even if you just make a batch of Salsa Verde and can or freeze it, it’s better than not using them for anything.

Also known as the Mexican Husk Tomato, tomatillos are part of the nightshade family (along with tomatoes, eggplant, and peppers) and have been cultivated in Mexico since the pre-Columbian era. Tomatillo varieties produce fruit that is green, purple, or yellow with the fruit being relatively interchangeable in recipes. Despite being grown around the world, there isn’t much information collected on tomatillo production levels or trade on an international level.

Tomatillos are a very good source of dietary fiber, niacin, potassium, and manganese, as well as vitamin C and K. They provide more calories, fat, and protein per ounce than tomatoes, as well as antioxidants, minerals, and vitamins. They also contain phytochemicals that are thought to prevent cancer growth, though that is by no means definitive.

Tomatillos are ripe when they have filled the husk (oftentimes splitting it open) and are firm. When buying tomatillos in their husk, look for tomatillos that have filled or split their husk. If they haven’t gotten to that size then they were harvested too early, which can affect their flavor. Look for tomatillos without damaged skin as they will degrade quickly. If there is some damage you can easily remove it and use the rest of the tomatillo, but you will have to use them soon.

Tomatillos can be stored at room temperature (with husks on or off) for up to 1 week and will keep refrigerated for up to 2 weeks. For longer-term storage, remove husks and refrigerate in a plastic bag for up to 3-4 weeks. Tomatillos can also be frozen whole, sliced, chopped, or pureed in air-tight containers or freezer bags. If freezing them whole or in pieces, spread them out on a sheet pan and freeze them before bagging them. This will prevent them from freezing in one big block.

Remove husks and any remainder of the stem before using. If using raw, core the tomatillos with a paring knife as you would a tomato or simply cut the top off (but this wastes a lot of the fruit) and trim around where the stem attaches. Removing the core is not absolutely necessary, but the core can be a little tough. Rinse tomatillos under cool water and let them dry in a colander or on a towel. The skin will feel sticky but that’s normal. There isn’t anything on it and you don’t need to try and rinse that off.

Raw: slice and sprinkle tomatillos with some lime juice and salt for a refreshing snack. Chop or slice them and toss on a spring or summer salad. You can also chop and make a chunky salsa verde with onion, lime, cilantro, poblano, jalapeño, and garlic. Puree them raw and make a delicious sauce (like the mint one I mentioned at the beginning of the blog). Or you can just go all in and eat them whole. Tomatillos are really delicious and refreshing on their own.

Grilling: leave the tomatillos whole and toss with some olive oil and spices. Place them on a grill and cook until they are soft and the skin is charred. Enjoy them as is or turn them into a sauce, soup, or salsa.

Roasting: leave the tomatillos whole or cut them into chunks and toss them with olive oil and spices. Place them in a baking dish or on a sheet tray and roast at 400°F for 8 minutes then flip or toss them with a spatula and roast for another 5 minutes. You can roast tomatillos with poblanos and then make a traditional salsa verde.

Sautéing: slice or chop and lightly sauté with other summer vegetables for delicious, light stir-fries, fajitas, or tacos toppings. Lightly sautéed tomatillos are delicious on top of fish tacos with some pickled radish and daikon.

Pureeing: core, cut in half, and place in a food processor or blender. Add some lime juice or watermelon for a delicious margarita base. Add onion and garlic for a bloody Mary base, or experiment using in cold summer soups.

Sauce: chop and cook down with onions, jalapenos, and lime, or green tomatoes, cardamom, and cayenne for variations of tomatillo sauce that can be canned as preserves or used in pies or cakes. There are many other options for sauces, just look up some recipes and have fun.