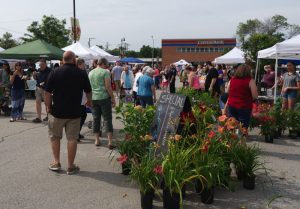 Part of my job involves talking to the public about The Land Connection’s training programs. More specifically, it means talking to farmers or people who want to get into farming. But where do I find these farmers, short of driving aimlessly along county roads looking for people working in fields? Well, farmers’ markets seem like a good bet. So last weekend I began a series of trips to farmers markets, visiting Kankakee and Watseka. My main goal was to talk about our upcoming programs, like the Agritourism Workshop in early August, the Season Extension Workshop in October, and our Central Illinois Farm Beginnings course, a string of seminars running through March of 2016. On this first leg of my tour, I talked with people who run the gamut from well-seasoned farmers like our CIFB alumni Marty Gray, to people just starting to think about farming as a career.First up was Kankakee. The Kankakee Market is quite large and varied, including vendors selling a huge variety of products and services. There were lots of booths offering baked goods, prepared foods, even knife sharpening. There was a food stall that sold the most amazing deep-fried cheesy hash browns known to humankind. Live music was played in the central gazebo all morning long. In short, there were lots of things going on there besides farmers selling produce. The farmers who were there tended to run bigger operations and have years of experience. Nonetheless, everyone I talked with felt they could be doing more. They wanted to know more about ways to add income streams to their operations. For those farmers, I explained our intensive workshops like Agritrourism or Season Extension, among the many other programs we offer.

Watseka was a much smaller affair, but I found the same curiosity from farmers about adding to or improving upon their business. One farmer was interested in growing cut flowers. Another liked the idea of growing mushrooms. Everyone was happy to learn about our classes, and to know that an organization like ours is there as a resource. Best of all was my conversation with a young woman who isn’t a farmer at all, at least not yet.  She was going stall to stall and asking the farmers about how they got started. By sheer luck, I was there at the same time and was able to tell her about our classes, including our Farm Dreams workshop in September, which is designed specifically to answer the kinds of questions she was asking. It was great to see how excited she was about opportunities to learn about running a farm before she jumped in blindly, and I’m very glad I was there to answer some of her questions. To me, that alone made the trip worth it.

Well, that and those hash browns. Wow.