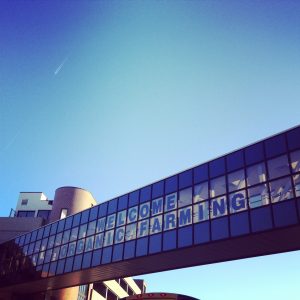 The Land Connection went to the MOSES (Midwest Organic Sustainable Educational Service) conference this weekend. The social media platform Twitter became a vital ingredient of the trip. Cara mandated we tweet for MOSES, so Jeff and I were thrown into the deep end of the social media pool. On Tuesday, before we left and were in the office downloading it to our phones it seemed so foreign and confusing, but after using it for nearly a week, I’m not-so-secretly appreciative of being forced into the 21st century. It was a great experience to have to figure it out in such a thriving, dynamic environment with a LOT of live-tweeting and activity, and that is probably why my previous forays into Twitter were so unsuccessful. We went to a social media workshop run by Bossy Acres Farm as the first session on Friday. The fact that over 200 people came to that session surprised me, but also reinforced that (gratuitous plug coming) the social media workshops we are doing later this month are going to provide needed education to farmers. 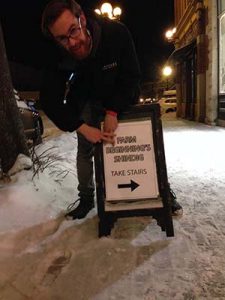 We were getting pretty loopy with the hashtagging by Friday night, which brings me to the next thing – networking!Probably what will have the biggest long term impact on our work is the networking opportunities we had. Learning about what people are doing in other parts of the Midwest, and the world even if those ideas might not be directly applicable to the work we are doing in central Illinois, was great. Some of the people we talked to have ties to central Illinois, like Ryan Erisman, whose dad was one of the first organic farmers in the area, but he lives in Madison and works for the Farmer Veteran Coalition. Terra met Eric Sannerud at a conference and had a lunch meeting set up. The other three of us tagged along to hear about the Sandbox Cooperative project he started for lunch at a local foods focused cafe and stayed for five hours (we have been tweeting with him since). While his diversified incubator program is very similar in goals to our incubator project, we are taking a different route to get there. Still, hearing the ideas and seeing his enthusiasm gave me, at least, more interest and some new ideas about what an incubator can be.

At the Farm Beginnings collaborative event, Jeff and I did some serious networking. I talked to Doug Nopar (insert gratuitous plug for Look Who’s Knockin’, being performed in five locations across central Illinois now!) and we met the woman who is the head of the national Farm Beginnings Collaborative. I spent quite a while chatting with a farmer from northern Minnesota named Tyler about permafrost lines and heating with cords of wood. We had also met the women who run Patchwork Farms Chicago, and it turns out they had found their land though the classified ads on The Land Connection’s website! Realizing that the work we do to support the sustainable food community actually impacts people who we might never meet by meeting some of them is definitely rewarding.

This idea of food as an integral part of community is something else that was emphasized again and again. The conference had breakfast and lunches for everyone in a huge room, and so each meal turned into a conversation with new people and new chances to learn, and it worked in the most random way: by where you could find an empty chair. 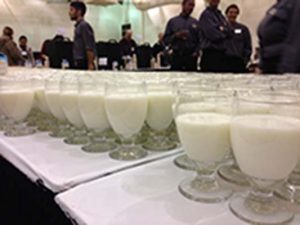 At lunch on Friday, one of the people I sat with was a woman who worked in marketing for the natural foods arm of a major industrial food producer. She talked about how one of her friends got assigned to a product that was pretty much the antithesis of what the good food movement stands for. However, in consumer focus groups with socioeconomically disadvantaged women, the main theme that came out was that they buy this product because it allows them to be able to work multiple low-paying jobs, and still be able to cook a hot, relatively nutritious meal for their families to eat together. Being able to maintain that part of their culture is of huge importance. The fact that this came out during a communal meal only emphasized to me that it’s true.

Other things of note, in no particular order: 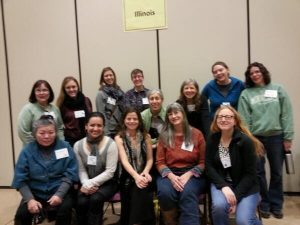 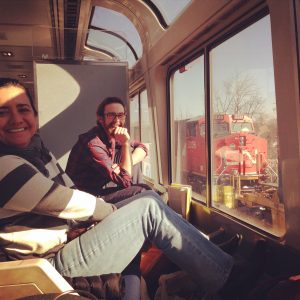 This trip really did wind up being about the journey (although the destination was  pretty important too). We spent a long time on Amtrak, where we played Cards Against Humanity with a woman returning to Lacrosse from Swaziland . If you have never played it, it is a party game like Apples to Apples, but the goal is to offend everyone in a fairly hilarious manner. Beyond being a fun way to pass the time, it served as great teambuilding. It was a very different experience taking the train with others than alone – and we had a lot of fun. We sat in the observatory cars with the huge windows and got to watch the landscape change from the fields of downstate to urban Chicago, and then from Chicago north through Milwaukee and then west across the state of Wisconsin, passing rolling hills and rocky bluffs, before getting to Lacrosse, across the Mississippi River from Minnesota.

Cara coined the phrase “traingry” to describe my feelings about waiting for Amtrak (we left Lacrosse on Sunday at the same time we were supposed to arrive in Chicago), but by the end my will had been broken and I was okay with it. Kind of. 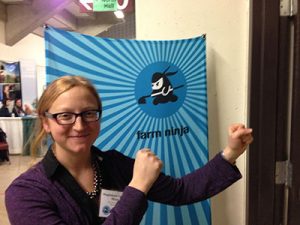