At the Farm Progress Show in Decatur last week, I saw encourging signs that even among conventional farmers there is growing recognition of the importance of sustainable farming practices. During two panel discussions, one on cover crops, the other on wildlife restoration, the conversation made it plain that protecting and rebuilding the health of our farmland is being accepted as a necessary component of farming, even among those who grow on an industrial scale. 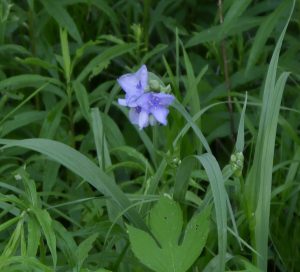 To be clear, the farmers who spoke on these panels were not made up of people working small fruit or vegetable farms. These were, by and large, corn and soybean farmers who measured their land in thousands of acres rather than tens. But even farmers following the conventional models are beginning to look at changing some of their practices. The reason for this is pretty simple: sustainable practies can save them money. Cover crops, for example, are a great way to build organic matter, which helps retain moisture and nutrient in the soil. Some of the panelists reported large increases in organic matter after a few years of using cover crops. Healthier soil means smaller outlays on fertilizer.

Wildlife restoration, which in this context means adding native plants around the borders of the crops, also helps retain moisture and nutrients, as well as attracting beneficial insects. Farmers who’ve done this on their land reported large populations of bees, butterflies and other pollinators. There are a number of subsidy programs that will compensate farmers for adding native plants on part of their land, so there’s also a financial benefit. As much as they appreciated the boost to their bottom lines, several of the farmers who spoke at the wildlife restoration panel were genuinely pleased with the added aesthetic value native palnts can add. One farmer proudly passed around photos of the numerous bee balms and spiderworts coming up on his property.

It was heartening to see the enthusiasm on the part of these farmers for adopting sustainable strategies. The financial benefits are certainly an important motivator, but a real sense of responsibility for maintining healthy farmland was pretty clear. One panelist went so far as to say, “It’s not all about the money. I want to feel like I’m doing something good for the land.” Sounds like progress to me.