Leeks are one of the national emblems of Wales, and are typically milder than onions, making us less likely to cry while cutting them. Leeks are an excellent source of vitamin K, and a good source of vitamin B6, folate, vitamin C, copper, iron, manganese, and vitamin A. Leeks are low in saturated fats, cholesterol and sodium.

When buying leeks, look for ones with long, firm, white stems. Cut and use leeks with their green leaves still attached for stock. Leeks that have had their roots removed can be used more quickly than ones with the root base still attached as they typically don’t hold up as long.

Refrigerate leeks unwashed and dry, with roots still attached, for up to 2 weeks. Lightly wrap them in plastic to avoid aromas spreading to other foods. Damp paper towels can also be used but they won’t be as effective in preventing the spread of odor. For longer-term storage, leeks can be buried in moist sand and kept in a cool, but not freezing, location. Leeks can also be pureed and frozen for later use in soups and sauces.

Preparation – if preparing the leeks as halves, cut in half lengthwise and thoroughly rinse under cold water to remove grit and soil between the layers. Make sure to hold the layers together so they don’t slip apart while rinsing. When preparing to slice the leeks for a dish, leave the stalk whole or cut in half, slice the leek as desired, and then rinse the slices in a colander under cold water as you break sections apart and remove any dirt.

Whether raw or cooked, leeks can be a substitute for onions in any dish, or combined with onions for a more dynamic flavor. Add to soups, stocks, stir-fry, or long-cooking dishes such as grains, beans, or stews for added flavor.

Stock – save the dark green leaves and add to stock. The dark green sections of the leaves are edible but can be tough unless thoroughly sautéed.

Raw – slice or chop leeks and add to a variety of salads, pasta salads, or sandwiches. Add as a garnish to soups, egg dishes, fish, and potatoes.

Puree – puree raw or cooked leeks for a soup base. It is excellent in cold soups as well as hot soups and stews.

Roast – cut leeks in half lengthwise and place the sliced side down in a baking dish. Drizzle the leeks with olive oil or place a pat of butter on each one and sprinkle with salt, pepper and fresh thyme. Cover with foil and bake at 300°F for 1 hour, then remove the foil, carefully flip the halved leeks, and bake uncovered at 400°F for 15-20 minutes until they start to brown.

Sautéing: toss chopped or sliced leeks with olive oil, salt and pepper, and sauté over high heat until softened or caramelized. Add to quiche, mashed potatoes, egg dishes, or burgers and paninis. 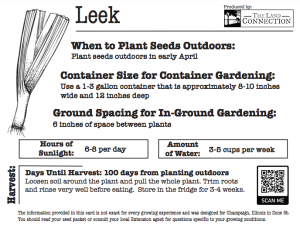 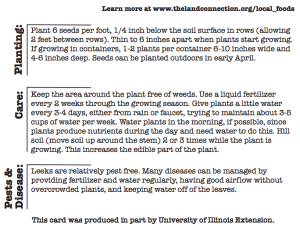 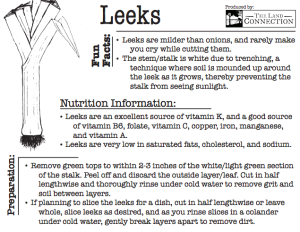 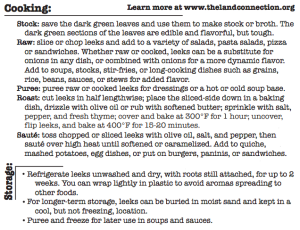