Sweet Peppers (and hot peppers) are a fruit, botanically a berry, and are only considered a vegetable in the culinary context. Peppers, both sweet and hot, are native to Mexico, Central America, and South America. They spread throughout Europe and Asia after being imported to Spain in 1493. Peppers have been embraced and cultivated on every continent except Antarctica, resulting in thousands of variations in size, shape, color, heat, and most importantly, taste!

Sweet peppers, like common bell peppers, produce little to no capsaicin, a lipophilic chemical that can cause a strong burning sensation when it comes in contact with mucous membranes. The absence of capsaicin is due to a recessive form of a gene that eliminates the compound and, consequently, the “hot” taste usually associated with the rest of the genus Capsicum.

Some of the many, many varieties of sweet peppers you might find at a local farmers market: Bell peppers – a grocery staple with mild sweetness, Bullhorn peppers – an old heirloom “bullhorn” shaped very sweet pepper, Italian Frying Peppers – long, thin, twisted peppers that are very sweet and only look spicy, Sweet Pimento – small, golf-ball to tiny pumpkin shaped sweet peppers with a distinctive juicy, crunchy texture. You may even find heatless sweet versions of hot peppers like Nada-peno (a heatless jalapeño) or Habanada (a heatless habanero)!

The compound known as capsaicin is what makes peppers hot. This compound is concentrated on the seeds and the ribs of the pepper making those 10-16x hotter than the rest of the pepper. Chile peppers are only hot to mammals. Birds from South America eat them as a part of their daily diet and aren’t bothered by capsaicin. Most super hots are significantly larger than broad swaths of more traditional chilies but there can be extreme variation across all heat levels. Identification of hot peppers is important to knowing heat levels without tasting.

Hot peppers come in a very wide range of heats, a result of hundreds of years of selective breeding by diverse populations across the world. Many peppers are rated on a scale of hotness called the Scoville Scale. This is a good way to determine the relative hotness of a pepper variety but it’s important to remember that we each have a different tolerance of heat. Finding a pepper that you are comfortable eating, like a jalapeño, can help you determine if you will like the heat of a different pepper with a similar heat level and give you a comparison point for how much hotter a higher Scoville Scale level might be compared to your comfortable heat range. The Scoville Scale heat level is often given as a range. This is because peppers can be more or less hot depending on the growing conditions they had while ripening. That’s why your neighbor might have hotter jalapeños than you, even when you both grew the same variety!

Capsaicin can be difficult to remove from skin, often lingering for hours to be activated by accidental contact with mucous membranes. While washing hands is a great practice in the kitchen, it generally does not remove capsaicin. Chili oil or capsaicin is much more soluble (dissolvable) in alcohol than water. For this reason, alcohol based hand sanitizer works fairly well at neutralizing capsaicin. Make sure to get full contact between your alcohol based hand sanitizer and areas that often hold capsaicin such as around fingernails.

When shopping for sweet or hot peppers, look for firm peppers without soft spots or wrinkled skin. Be sure to check the bottoms of the peppers as this is oftentimes where they will begin to deteriorate. Occasionally you’ll find a pepper with some dark seeds, bad core, or what looks like mold inside. This is what happens when you have a hollow vegetable out in a field in the sun. You can always remove the bad parts, wash and then cook as normal. Unfortunately, any peppers with heavy mold inside will have to be discarded.

Many hot peppers, especially jalapeños, can develop “cracked” skin which some people take as a sign that they are hotter. The “cracked” skin doesn’t mean anything is wrong with the pepper, just that it received irregular irrigation or rain. Some hot peppers, like Rezha Macedonia, are bred to have a lot of cracking, called corking or embroidery. These peppers will have cracking regardless of growing conditions.

Store fresh, unwashed peppers in the refrigerator, wrapped in paper towels, for 1-2 weeks. For longer-term storage, peppers may be frozen. Wash and dry peppers, remove the core, seeds, and ribs, cut into bite-size pieces, and place in an airtight container or freezer bag. Peppers will soften when thawed, so take out only the amount you need and replace the rest in the freezer.  You can also dry hot peppers, and some sweet peppers like sweet paprika peppers, in long swags (sometimes called ristras) or wreaths. Store dried peppers out of the sun in a ristra or in a sealed container.

Preparation – rinse the peppers under cold running water to remove any dirt and dry them with a towel or let them air-dry. Use a small knife to cut around the stem at the top, and remove the stem and core of the pepper. If stuffing whole peppers, remove the top 1/2- to 1-inch of the pepper and then scoop out the seeds and ribs with a spoon. For most other preparations, once you have removed the stem and core you can cut the pepper in half from top to bottom, and then scoop or cut out the ribs and seeds.

For many small hot peppers, it is oftentimes easiest to cut the stem off, cut the pepper in half, then scoop out the seeds and ribs. Be careful when preparing hot peppers of any kind. For the greatest safety, wear rubber gloves while chopping and handling, and DO NOT touch eyes, nose, mouth, etc.. Wash hands thoroughly when finished. Rubbing alcohol or an alcohol based hand sanitizer can help to neutralize capsaicin on hands.

Char/Roast – place whole peppers under the broiler, on the grill, or over an open flame. Char them, turning often until the skin is evenly cooked. Place peppers in a brown paper bag and close the top, or in a bowl and cover tightly with plastic wrap. Allow to steam for 10-15 minutes. The skin will peel off easily with the aid of a paring knife. After peeling, remove the stem, core, and seeds. You can also roast pieces of pepper under a broiler by placing them on a rimmed baking sheet with the skin side facing up.

Steam – cut peppers into pieces, place in a pot with a steamer basket above an inch of boiling water, and steam for 5-8 minutes until the peppers are tender.

Sauté – cut peppers into strips, rings, or dice into cubes, and sauté in a skillet or sauté pan with some oil over high heat until the peppers begin to soften (approximately 4-6 minutes). Toss with other veggies, rice, noodles, or protein/meat and season as desired.

Dry – thread thin walled peppers onto a string and hang in an outbuilding, or dry place with good airflow, for several weeks until completely, crumbly, dry. Peppers can be dried in an oven set to a very low heat, or a dehydrator with good airflow, but it’s important to note that drying peppers (even sweet peppers) can make nearby air uncomfortably spicy. Dried peppers can be used to season meals for many years before losing flavor. Moisture will degrade dried peppers quickly. 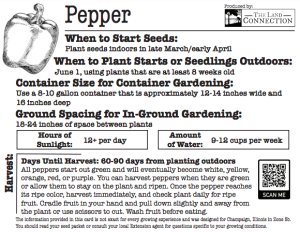 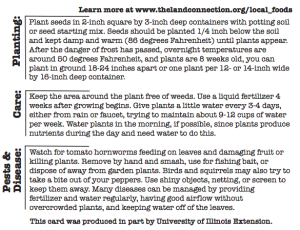 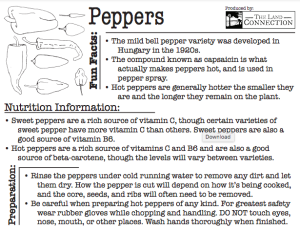 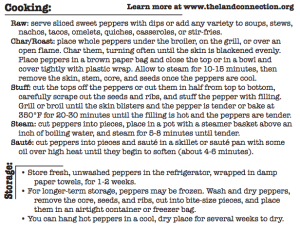