Summer squash varieties include zucchini (yellow and green), pattypan (round or flattened like a plate, typically white, yellow or green) crookneck and straightneck (the stem end is either bent or straight, typically yellow), and tromboncino/zucchetta. Summer squash is harvested when they are immature, which is why they are so nice and tender and the skin is edible. This is very different from winter squash which is allowed to mature causing the skin to harden before harvesting.

Although nutritional values vary between varieties, summer squash is typically about 94% water and very low in calories. It is a great source of vitamin A, C, potassium, and calcium. The peel is where many of the nutrients hide, so never peel summer squash. Summer squash is easily digested, nourishing, and cooling. It also replaces lost fluids so it can be a welcome summer staple that hydrates while you eat.

When buying summer squash remember that unlike winter squash, it is harvested at the immature stage. Look for summer squash that is 6-8 inches in length. Pattypan and scallopini are good to buy when they measure about 3 to 4 inches in diameter or less.

Summer squash dehydrates quickly. Store unwashed in a plastic bag or in a hydrator/crisper drawer of a refrigerator for up to 1 week. Wash just before preparation as water droplets can promote decay of the skin and flesh during storage. Because the fruits are harvested when still immature, they bruise and scratch easily. Handle with care and use immediately after purchase.

For long-term storage, cook and puree summer squash and freeze in air-tight containers for future use. It is a particularly good base for winter soups. Canning is not recommended because the tender summer squash will simply turn to mush during processing unless you are making pickles. Zucchini can be substituted for cucumbers in some pickle recipes, and larger summer squash, especially zucchini can be grated and used in quick breads, like zucchini bread, or grated and frozen raw to be used later.

Raw – cut the squash into slices or sticks and enjoy with hummus or dip, grate and add to green salads or slaws, slice thin and put on top of pizza, or cut thick slices or cubes and add to soup at the very end to retain texture.

Steam – squash can be steamed when whole, halved, or cut into 1- to 2-inch pieces. Place in a pot with a steamer basket over an inch of boiling water and steam for 10-15 minutes. Thinner slices or smaller cubes should only be steamed for 5-10 minutes, or until tender. Top with butter, lemon juice, salt, pepper, or parmesan (or all of the above).

Roast – slice squash in half lengthwise or into thick slices or wedges, toss in olive oil, salt and pepper, spread out on a baking sheet (cut-side up) and roast at 450°F for 15-20 minutes.

Grill – cut in half lengthwise, drizzle cut-side with olive oil, salt and pepper, and place cut-side down on the hottest part of the grill for 3-4 minutes, then move to the edge/cooler side of the grill and cook for 8-10 minutes. Slice and enjoy with kabobs.

Bake – blanch slices (place slices in boiling water, then into ice water after about 1 minute to halt the cooling) and layer casserole-style (2-3 layers of each) with onion and seasoned bread crumbs, tomato cream sauce, or other vegetables. You can even go for ratatouille with Asian eggplant, bell pepper, and potato. Bake at 350°F for 15-20 minutes (or until hot and bubbling). Zucchini can be grated and used in quick breads, like zucchini bread.

Stuff – steam whole pattypan squash (top removed) or halves of other squash varieties. Cut in half lengthwise and scoop out the center and seeds. With pattypan squash cut the top off then scoop out the center of the whole squash like you would a bell pepper. Stuff the squash with your favorite filling, and bake at 350°F for 15 minutes, or until the squash has started to brown slightly and is fork-tender. 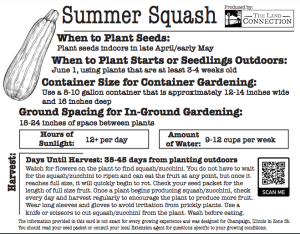 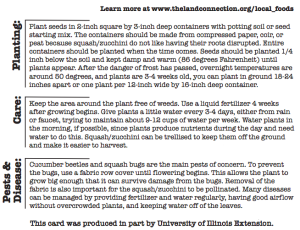 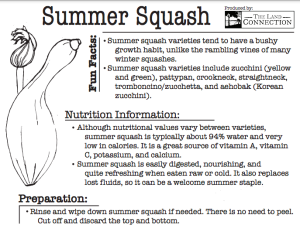 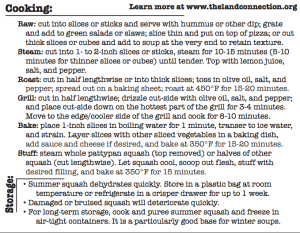